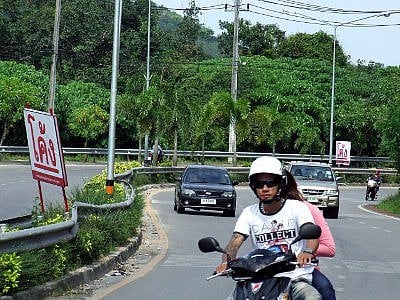 PHUKET: The Phuket authorities’ goal to keep the road toll this year under the four deaths of last year suffered a severe setback when three men died in motorcycle accidents on Thursday night – the first night of this year’s ‘Seven Days of Danger’ road safety campaign.

Polish national Pawel Jack Gilman, 37, died after the limited edition Liverpool FC Honda Scoopy motorbike he was riding slammed into a barrier on the curvy section of Wichit Songkram Road that runs over the hills between Kathu and the Central Festival intersection.

Mr Gilman was riding toward Phuket Town when the accident happened.

A helmet was not found at the scene.

Tung Tong Police told the Phuket Gazette that the section of road had claimed many lives over the years.

“Two Thai men, both drunk, died in motorbike accidents in the same area last month. Both accidents were at about 3am,” said one officer.

At night there is very little traffic on the road, which encourages some people to drive faster along that section of it, he said.

Following the death of Mr Gilman, police have now posted large signs on the sharpest curves to warn motorists.

The signs are marked in Thai with the word kohng, meaning “curve”, in large red letters.

Tung Tong Police Duty Officer Lt Col Chana Suttimard told the Gazette that the Polish Embassy in Bangkok had been notified of the death.

Mr Gilman’s was not the first accident as the Seven Days of Danger campaign got underway, however.

Adirak Tongdee, 30, was rushed to Vachira Hospital Phuket in Phuket Town after the motorbike he was riding slammed into a parked six-wheeled truck near Tesco Lotus on the bypass road at about 10pm.

Mr Adirak died of his injuries at about 7pm yesterday.

It is believed Mr Adirak was drunk while driving.

He died from his injuries at about 3pm yesterday.

As the Seven Days of Danger road-safety campaign continues, police will continue to monitor checkpoints set up all over the island and pull over vehicles for a variety of suspected infractions, including drunk driving.

According to preliminary reports, 15 accidents were reported on the first day, with 18 people suffering injuries. Most were in Muang District (13), followed by Kathu (4) and Thalang (1).

Among those injured was 36-year-old Frenchman Jerome Berna who, following a motorcycle accident at 10pm, faces charges of drunk driving and failure to wear a helmet.