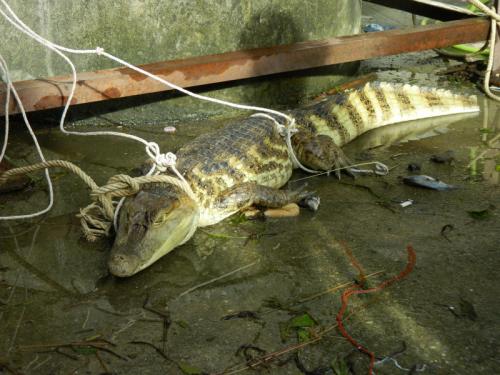 PHUKET: An elevator technician who went night fishing in central Phuket on Tuesday thought he had caught a monitor lizard.

But when he got to his house, he discovered he had manhandled a meter-long Siamese crocodile and brought it home on his motorbike.

Charee Pattangtanang, 31, went fishing with a friend, Wanchai Hansopa, at their usual spot – a lagoon behind The Valley housing estate in Srisoonthorn, Thalang.

“We saw something moving in a clump of grass, so we hit it with a piece of wood,” Mr Charee said.

“It was dark – we could not see clearly. We thought it was a monitor lizard, so we put it in a bag and took it home on my motorbike,” he explained.

“When we arrived at my home, we called the neighbors to show them what I had caught. That’s when we found out it was a crocodile,” Mr Charee said.

The young crocodile is still at his house, but tied up with rope as a precaution.

“I water it and give it some fish to keep it alive. We will just leave it tied up here for now until the municipality decides where to take it, ” Mr Charee said.

Srisoonthorn Mayor Worawut Songyos said his officers were looking into what to do with the reptile.

“I believe the crocodile was raised by somebody and then released because the owner could not take care of it anymore,” he said.