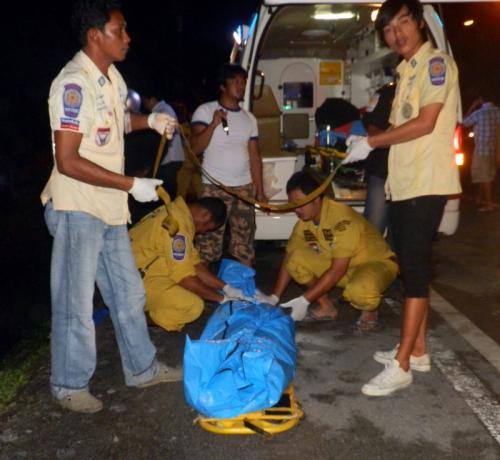 PHUKET: A helmetless motorbike driver from Phuket Town died last night after losing control of his motorbike and hitting a utility pole in Thalang.

Police rushed to the scene to find the body of Kongkait Ngamtong, 26, in a ditch in front of the Muang Thalang School on the northbound side of Thepkrasattri Road, said Thalang Police Officer Narong Muangdoung.

“Witnesses said Mr Kongkait was riding his motorbike at high speed. As he arrived at Muang Thalang School, he lost control and drove his bike into the ditch. He flew off the motorbike and smashed his head against the pole nearby. He died instantly,” Capt Narong said.

“His body was taken to Thalang Hospital for his relatives to claim,” explained Capt Narong.