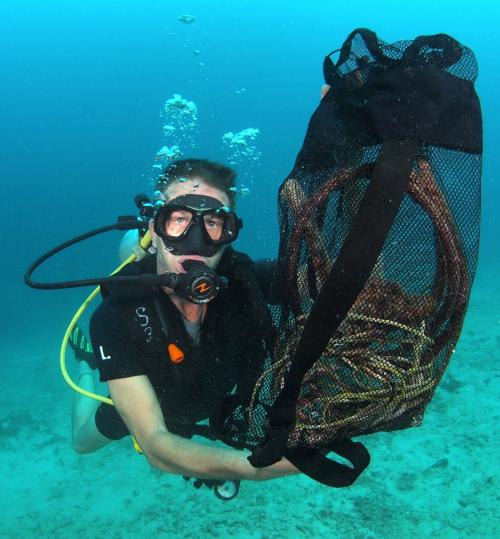 PHUKET: In honor of Her Majesty Queen Sirikit’s 81st birthday on Monday, Phuket’s dive community, supported by the Department of Marine and Coastal Resources and local government bodies joined together in a mass effort to raise the world’s awareness of the importance of keeping Phuket’s marine and coastal ecosystems clean and debris-free.

The event was launched on Tuesday with more than 1,500 volunteer divers and non-divers gathered at Chalong Pier, said a Go Eco Phuket press release.

A total of 4,356 kilograms of debris was collected, and two much-needed mooring lines were established at one of Phuket’s most popular dive destinations, Racha Yai.

Ms Leach said there were some hangups with registration, but a new system has already been discussed to prevent such issues in future events.

“There were more younger Thais involved, with volunteers from Phuket Rajabhat University, Phuket Technical College and other educational establishments on the island,” Ms Leach said.

Phuket Governor Maitri Inthusut said after the event that he appreciated the dive community coming together and would like to see a cleanup event on this scale every year to continue to raise awareness worldwide.