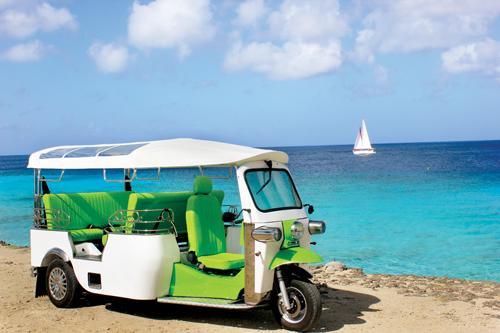 When they began supplying electric e-Tuks all over the globe, from Greenland to the Caribbean, it became clear to the manufacturers that practically all three-wheelers produced had been designed specifically according to customer requirements.

In order to provide customers a simple way to fully customize their e-Tuk, the company introduced a web configurator: “My e-Tuk”. In a couple of easy steps a wild combination of colors and options such as seat heating, rain covers and speed charging can be selected.

The fine-tuned process of Tuk Tuk Factory’s production facilities, where passenger, cargo and vending e-Tuks are produced, allows customers configurable wide range of options and color schemes for every visible part in the e-Tuk can be selected.

“We literally put our customers in the driver seat where the design of their e-Tuk is concerned” says Roland Vos, director of Tuk Tuk Factory.

“It’s these customers that play a leading role in the development of our fun flavored vehicles. Experience has taught us that people have an even greater affection for our e-Tuks if they can tailor-make them to match their specific wishes. So instead of implementing product-standardization, we decided to embrace the diversity and to design a new website for it.”

In 2009 Tuk Tuk Factory sought contact with the roots of the tuk tuk: a business trip to Asia and Thailand. A successful partnership in Thailand was started. Within eight months, a prototype was produced based on the Dutch engineering experience and authentic Thai charm. Soon after, this prototype was licensed within Europe.

The environmentally friendly, retro-styled E-Tuks can be found driving in cities, along seasides, airport passenger terminals, on mountains or in natural reserves worldwide.