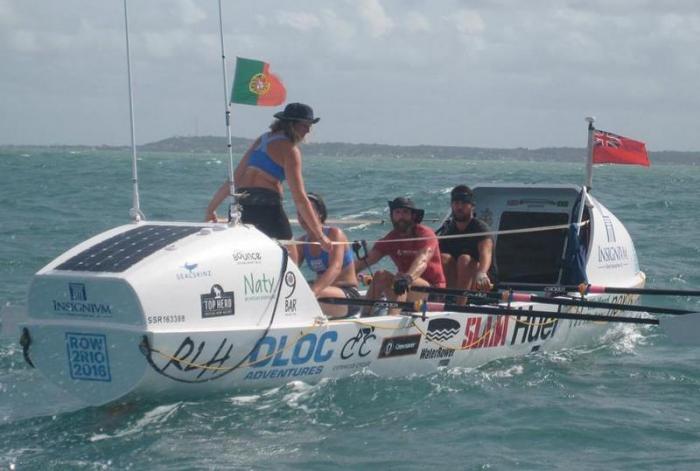 PHUKET: Australian head coach at Phuket’s Unit 27, Luke Richmond, sat down in an exclusive interview with the Phuket Gazette after completing a world-record setting rowboat journey from Portugal to Brazil.

Mr Richmond – already in peak condition from incorporating a NeuroPhysics training program from Ken Ware into his weekly schedule of CrossFit, climbing and adventure training – was invited to join the Row2Rio challenge after one of the team members was struck with appendicitis just a few weeks from their scheduled departure at the end of February. Without hesitation, Mr Richmond jumped on a plane to meet with Susannah Cass from Ireland, Mel Parker from the UK, and Jake Heath, also from the UK.

Gazette: In the past five years, you have climbed the biggest mountains on six continents, been held captive in West Papua and has endured many ‘suffer-fests’ on expeditions around the world. Why was this the toughest adventure so far?

Richmond: This was the toughest adventure so far simply due to the fact it was one continuous cycle. I have had tougher single days in the mountains, but being on a cycle of two hours work and two hour rest is a mental and physical test of endurance.

Gazette: What ended up being the most difficult part?

Richmond: The most difficult part was the final two weeks. Our auto tiller had failed, so we were manually steering; we were encountering strong head winds – it was a brutal slog to stay on course.

Gazette: How has this extraordinary experience changed your outlook on life?

Richmond: This experience hasn’t changed my outlook on life at all – it has solidified it. I already believed that life is for living and have shaped my life around being able to drop everything a go on adventures just like this one. I took the call and a week later I was getting on a boat, that’s what life is about, not your job or mortgage.

Gazette: A total of 55 days is a lot of time with anyone. Were there ever any tense moments on the boat?

Richmond: Of course there were tense moments, I don’t think you can ever have four strangers thrown together and their not be. However, no matter what the issue was, it was always quickly resolved, and it was back to business as usual. It was too tough an ordeal to hold grudges; we had to work as a team to get the job done.

Gazette: How does it feel to set a world record? [Record, still to be confirmed, was for the ocean route pioneered by the mixed-gender rowing team.]

Richmond: The world record never really entered my mind, the journey itself gave me the biggest sense of achievement. The record would never be enough motivation to go through what we did you have to enjoy and cherish the hard times and the journey itself. But hey, it always looks great on the CV.

Gazette: Having never rowed a boat more than a few hundred meters before joining the Row2Rio adventure, Did anything in Phuket prepare you for what you for the undertaking?

Richmond: Phuket most definitely prepared me for this. I coach CrossFit at Unit 27 and our entire philosophy is to gain a fitness level that makes you ready for anything. This is achievable for everybody, it just takes hard work and some lifestyle changes. I was ready to row the Atlantic even though I didn’t train for that task specifically.

Gazette: The physical, mental and emotional toll of two hours working, two hours resting must have taken a massive toll on your body. By the end of the trip, how had your body changed?

Richmond: My poor body. I’ve lost 15 kilograms of body weight and have worn my body out to within and inch of breaking, but he got me through to the end.

Out on the ocean, we didn’t have time to recover. Now that I’m on shore, it is trying to repair and I’m in a fair amount of pain. It will be a long road back to full strength, but this is what life is about, not looking good and walking around in a gym, but putting your body and mind to the ultimate tests – that’s how we grow.

Gazette: What was the emotional impact of the journey?

Richmond: I had to keep some emotional control while out on the water, but once I hit land it all overtook me and I cried like a baby: all the pain, stress and hardship came out of me. Having my family at the finish was also amazing and we all had a little cry together.

Gazette: What made you decided to propose to your girlfriend from the middle of the Atlantic?

Richmond: Throughout the journey I was making a series of videos for the beautiful Elise, culminating in a marriage proposal from the middle of the Atlantic as I was being towed behind our boat on a rope like a human lure. I thought it would be an unique and beautiful way to go.

She said yes, so we are off to a flying start.

Gazette: The Row2Rio challenge was also to raise funds for Macmillan Cancer Support. How much money did the Row2Rio team raise?

Richmond: So far, the Row2Rio team have raised close to 80,000 pounds. Once the adventure is finished, the boat will be put up for sale and that money too will be donated to Macmillan Cancer support. [Ms Cass, Ms Parker and Mr Heath have the final cycling leg of the journey still to complete.]

Gazette: Will you be coming to back to Phuket?

Richmond: I’m definitely coming back to Phuket, we are upgrading our entire Unit27 CrossFit Phuket facility and I’ll be running the show throughout the coming high season.

Gazette: Is there anything else you’d like to add?

Richmond: That’s about it mate. Just want to give a big ‘thank you’ to all my supporters in Phuket. I hope I see you all for training at the Unit in the high season.