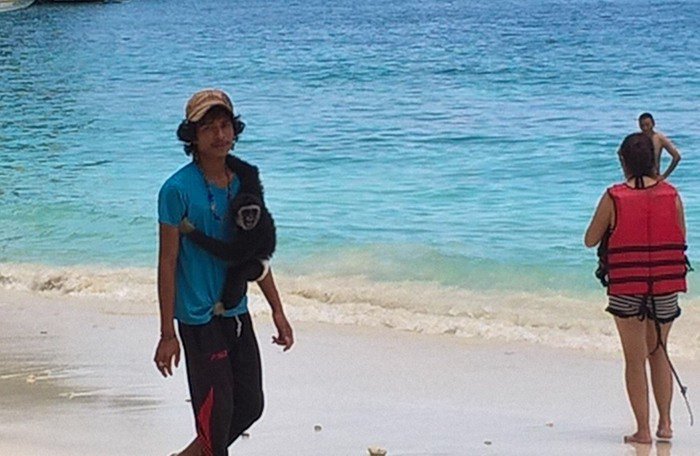 Police and national park officers were alerted to the presence of the touts at the popular day-trip destination last month when the Phuket Gazette forwarded photographs submitted by a reader .

“We will immediately look into what’s happening on Monkey Beach and put an end to it,” said Phi Phi National Park Assistant Chief Boonname Chauyradom at that time.

“There are many wild monkeys on Monkey Beach, which is why it is so popular with tourists. Animals such as iguanas can scare the monkeys away; sometimes people even make fake iguanas to scare them away. This compounds the issue of illegal ownership of gibbons and touting.”

Phi Phi National Park officers, along with Phi Phi Island Police, insist that they have done their best to keep an eye on the business of touts using gibbons and other wildlife as props for photo shoots with tourists.

“We are doing our best and citizens are doing their best. By helping each other, I believe we will be able to get rid of the animal touts on Phi Phi Island soon,” Mr Boonname said.

Island to get 200 new police officers