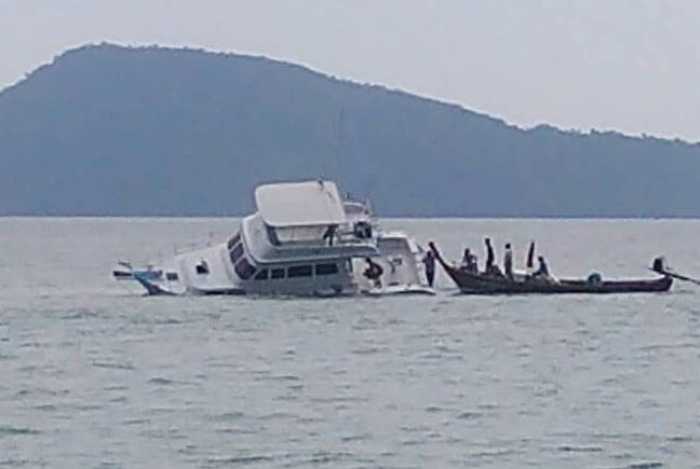 PHUKET: A group of tourists were rescued from a tour boat after it grounded on the rocks off Laem Ka Cape, on the east coast of Phuket’s Rawai area, yesterday.

The 12 people on board Electric Blue, including nine German tourists and one Thai tourist, were rescued after locals spotted the crashed boat and dispatched three longtails and a rescue team in a dinghy.

“No one was seriously injured in the accident,” said Rawai Deputy Mayor Theerapong Thaodang.

“When the rescue team and locals arrived at the boat, the tourists were clearly panicking and unsure of how to save themselves.”

The three-day, two-night tour of the islands in the Andaman was organized by the Thai tourist, Boonpeng Hanfaluen.

“My German friends and I had hired the boat and departed from Chalong Pier. We were returning from Phi Phi island when suddenly the boat hit some rocks as we approached the shore,” Ms Boonpeng said.

“The boat immediately started to take on water – fast. Fortunately, we were close to shore and were saved. We are so grateful to the rescue team.”

As of this morning, the boat remained grounded on the rocks.