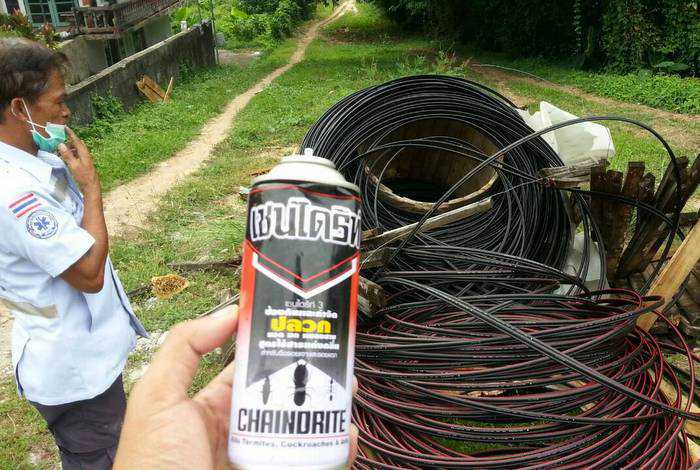 PHUKET: One member of a make-shift pest-control team suffered damage to his penis after a flaming bottle of pesticide backfired on him and his partner as they attempted to kill a colony of wasps today.

Prapanpong Sinmalee, 29, and his 22-year-old co-worker Phollawat Suwong were moving spools of power-cables from a truck into a field along Thepkrasattri Road near Baan Kor En curve, when they realized that a wasp nest was in one of the spools.

“They both sprayed chemicals into the spool, and when they went to light it there was an explosion, a co-worker told us,” said Lt Col Watcharin Jirattikarnwiwat of the Tah Chat Chai Police.

“When we arrived at the scene we found both men conscious. Mr Phollawat was injured on his left leg and Mr Prapanpong had injuries to his penis.”

The men were transferred to Thalang Hospital by Kusoldharm rescue workers.

“Their employer has been notified of the injuries. We will question the men more about the accident once they have recovered,” Col Watcharin said.

“These things can happen when people are careless with chemicals. Please, make sure you read instructions carefully and obey them.”