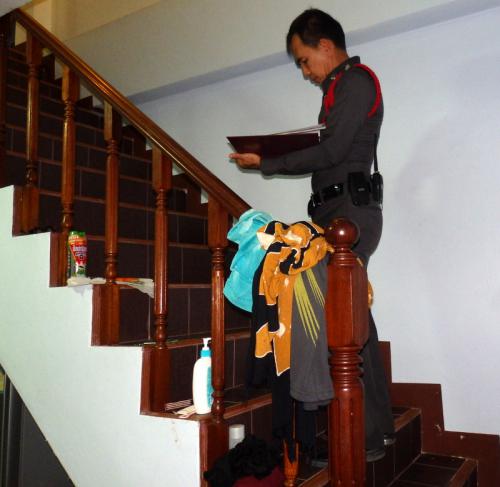 PHUKET: A 72-year-old German woman died yesterday after falling down a flight of steep stairs at a rented house near Nai Thon Beach.

Tah Chat Chai Police were notified of the incident at 7:30pm and rushed to the scene with rescue workers.

At the house on Sakoo-Nai Thon Road, police found the body of Margret Hiller lying at the bottom of a flight of 17 stairs.

“The house owner, Sgt Ittipol Rairat, told us that Mrs Hiller and her husband came to Thailand every year. They arrived on February 13 this year and planned to stay until February 25,” said Santi Prakobkarn of the Tah Chat Chai Police.

“Mr Hiller had gone to the beach around noon, leaving his wife alone at the house. When he returned at about 6:45pm he found her body.”

Police believe Ms Hiller did not die instantly from the head trauma.

“Unfortunately, nobody was at home to rescue her,” Maj Santi said.

Her body was transferred to Thalang Hospital and the German Embassy was notified.