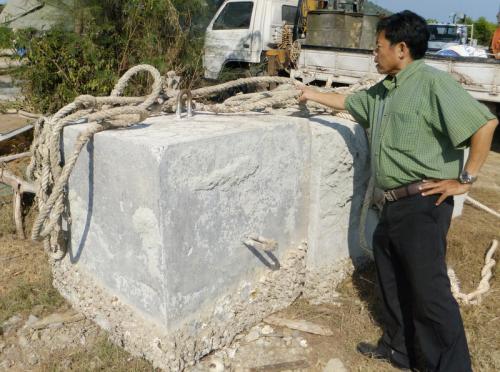 PHUKET: Eight unmarked concrete moorings near the Chalong Pier fairway that are believed to have sunk two boats within the last year were removed last Friday.

“I think it is best to have the blocks near the fairway removed to prevent further accidents,” said Phuket Marine Office Chief Phuripat Theerakulpisut, maintaining that no blocks exist within the approach channel itself.

Chief Phuripat has consistently denied that there were problems with the mooring placements, redirecting accusations toward the theft of mooring buoys, reckless driving and illegal moorings established by locals.

“The buoys are constantly being stolen – we cannot keep replacing them forever,” Chief Phuripat explained this week.

The first boat to fall victim to the unmarked mooring blocks was the Darunee, better known as the “Booze Cruise”. The ship, returning from a snorkeling trip to Koh Hei (Coral Island) with 15 tourists on board, was about 500 meters from Chalong Pier when it hit and got stuck on a mooring block, explained Chief Phuripat after the accident late February last year (story here).

“All of the tourists jumped into the water without life jackets. Boat operators in the area saw the incident and rescued them,” the chief said.

Mr Phuripat attributed the cause of the crash to reckless driving.

“The concrete mooring was installed to mark a boat anchorage. It has been there for months. Every boat driver in the area knows where the moorings are located and where the rocks are. The boat driver did not drive along the right path,” he said.

About 11 months later, on January 21, the 10-million-baht luxury cruise boat Lady Andaman sank after striking a concrete mooring in the approach channel, explained Australian boat owner “Sando”, who declined to be named in full (story here).

“It was about 4:30pm, coming up to low tide, when we hit the mooring. We were coming back from a trip with Australians, New Zealanders, Americans and Thais – who all took part in a Muay Thai fitness training session,” Sando told the Phuket Gazette.

No further plans have been made to remove any of the other 192 moorings placed around Chalong Pier, despite concerns voiced by local yachties, noting that some of them were located too close to existing moorings, risking collisions between neighboring vessels (story here).

“The rest of the moorings aren’t causing any problems for boats,” Chief Phuripat said.