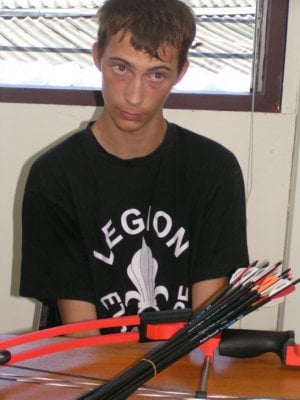 CHALONG: Jannik Norbert Volz, 19, from Germany, was arrested about 2 am on Sunday while he was attempting to steal a motorbike just after he had stolen a hunting bow and arrows from the Phuket Shooting Range.

Police arrested Jannik and charged him with “nighttime theft”, which in Thailand carries a stiffer penalty than robbery in daylight, after he was seen stealing the bow and 13 arrows on closed-circuit television (CCTV) installed at the shooting range.

Jannik rode to the shooting range on a black Honda Click motorbike he had rented in Patong. After stealing the bow and arrow, he then ditched the rental bike in favor of a red motorcycle of the same make and model that was parked near a nearby stage where monkeys perform, according to police reports.

Chalong Police Superintendent Col Samarn Chainarong said that questioning of the young German revealed that he had originally intended to steal a gun from the shooting range but the bow and arrows were an easier target. Jannik did not say why he decided to steal a weapon at all, Col Samarn added.

“Jannik does not speak any Thai and only a little English. We have contacted the German embassy and asked them to contact Jannik’s parents so that he can be deported,” said Col Samarn.

Jannik was staying in Thailand as a tourist at an unregistered address on Nanai Rd in Patong. He had planned to leave the country on February 6, but will now be processed for deportation after he is charged with theft at night, said Col Samarn.

Despite the young tourist’s evening of erratic crimes, Col Samarn said that Jannik did not seem to be intoxicated or on drugs at the time of his arrest.

“Jannik said he was operating alone, although we are investigating whether there is anyone else involved,” Col Samarn added.