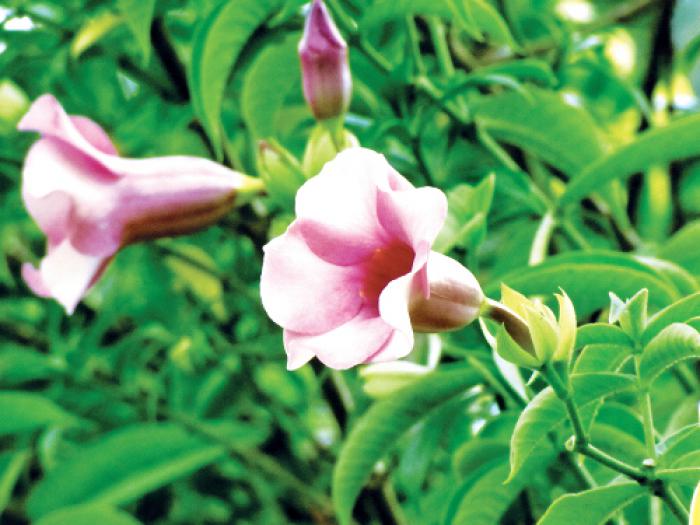 PHUKET: I’m sure you have heard the expression, beloved by florists the world over, “Say it with flowers”. Here’s an interesting slant on the expression. An elderly couple employed a “nice” German prisoner of war to tend their garden during the Second World War.

I remember the practice – my English parents did likewise. But this POW was different. When the bright yellow crocuses came up in their spring lawn, they spelled out “Heil Hitler!” An arresting
example of man controlling nature.

Talk of constraining natural forces recalls a recent discussion in this column on low maintenance gardening, a necessity for most of us on this emerald isle because of such factors as high levels of heat and humidity, and diminishing levels of personal energy set against the unbridled vigor of plant growth. I advised small trees and plenty of shrubs and especially evergreens or plants with a neat appearance that could mostly be left to their own devices.

In this regard, climbers are a sound choice, for they are among the most tractable of plants. In contrast to the rigid and inflexible branches of trees and large woody shrubs, their stems are flexible and limber, and can be guided or trained to take any direction you want – upward or outward on a wall or fence, around a tree or unattractive post, or up and over a trellis, arbor or pergola. Some can even serve as ground cover. And because they all have relatively slender branches, they are easy to trim or prune.

But be aware that though all vines have long, pliable stems, they climb in a variety of ways. Some are self-supporting and equipped with tendrils; some twine around their own stems; others cling by means of suckers to existing structures. And still more are scrambling or scandent plants that ascend skywards with no visible means of attachment; they climb effectively only if their stems are securely tied to some form of support.

I propose leaving this last category for another day. While it means leaving out vines I would personally want in a garden and do indeed possess, I am conscious that my allamandas, chalice vines, bougainvilleas, thunbergias and Rangoon creepers are all heavyweight vines that need propping up. Still, I have lauded their virtues before and will do so again. In terms of producing near continuous displays of exotic and eye-catching blooms, they are indispensable.

Even without them, the choices are extensive. One of the best is the bignonia. It fits our criteria because it will thrive unattended, in most conditions, and climbs by tendrils and holdfast discs, attaching itself to almost any surface. The flowers are trumpet-shaped , about two inches across and are conspicuous in plant nurseries with their attractive deep red or purplish blooms with a yellow or white throat. Often they appear in hanging baskets.

Bignonias have been subject to much botanical reclassification: the genus once included many vines with trumpet-shaped blooms. Confusingly, some are still sold as bignonias, but the purple flowering variety usually found here is often now called saritaea magnifica or Baan burii muang in Thai.

Whatever you care to call it – saritaea or bignonia capreolata – it is spectacular, a vigorous grower which has shiny dark green leaflets, each pair with a branching tendril. Perfectly equipped for upward growth, my own specimen, left to its own devices, has colonized an alstonia and produces a seemingly continuous floral display. In America it is sometimes called crossvine; when its stem are cut, it resembles a cross.

The much smaller bignonia (or tecoma) capensis has only a partly climbing habit. But as a relative, it deserves a mention here. Smaller and slower growing, T. capensis, has glossy green, pinnate leaves and orange or yellow tubular flowers that are borne in clumpy racemes at the end of branches.

You may know it as the cape honeysuckle, a climber tolerant of a wide range of conditions including salt spray, wind and drought. A year-round bloomer and another good choice for the laid-back Phuket gardener.