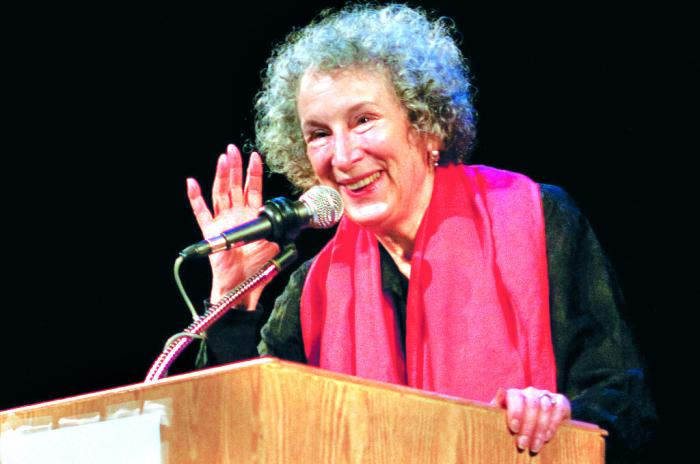 PHUKET: Alice Munro and Margaret Atwood are the Ali and Frazier of Canada – the top two literary heavyweights. Munro is now champ, having recently scored the knockout punch of winning the Nobel Prize for Literature.

The two writers could not be more different. The 82-year-old Munro writes only short stories, collected in 14 books. Eight years younger, Atwood is the more prolific: 21 novels, 15 books of poetry and 11 of literary criticism and assorted essays. Munro is studiously nonpolitical; Atwood is in the forefront of feminist and environmental causes.

Atwood’s politics bleed over into her fiction, leavened with toughness and wild humor. She has recently completed a science fiction trilogy with MaddAddam (Doubleday, New York, 2013, 394pp). You really do have to read the first two novels – Oryx and Crake and The Year of the Flood – but Atwood has thoughtfully provided a synopsis of the pair for forgetful readers like me.

The time is the future, the place, the Pacific Northwest. Democratic politics and a free press are long in the past. All power is wielded by rapacious corporations whose minions are sheltered in corporate compounds, guarded by an all-powerful security apparatus known as CorpSeCorps. Outside these walls are the lawless purlieus of “pleeblands” whose wretched inhabitants survive on synthetic slop.

The environment is degraded, global warming amok, cities underwater. Genetic manipulation is so rampant that a scientist code-named Crake develops an alternative nonviolent human species known as Crakers, with huge green eyes, genitalia that turns blue when aroused, a diet of grass, no clothes and no knowledge of good and evil. His girlfriend Onyx instructs them in a new ersatz religion. Crake then launches upon the global market a pill called BlyssPluss which enraptures the entire human race and then kills them.

Thinking himself the sole survivor, Crake’s friend Jimmy, code-named The Snowman, who has killed Crake after Crake killed Onyx, leads the Crakers to the seashore. The first two novels end at the same moment: when human intruders appear on the beach. The final novel takes off from there: the battle between the good survivors who formed the underground resistance to the old order, and the evil Painballers, former gladiators who have been stripped of all humanity.

Thus summarized, the trilogy might seem banal and fey, but is anything but. A tough, violent, cynical, larcenous survivor named Zeb, who leads an ecological resistance group known as God’s Gardeners, dominates the third novel and, like Satan in Paradise Lost, has all the best lines.

At sixteen, he flees his father, a phony preacher at the Church of PetrOleum, who delights in pornography and child-beating, Zeb uses his computer smarts both to seize his offshore riches and expose him as a fraud and murderer.

He then launches himself upon a checkered career of multiple jobs and aliases, constantly assuming new identities and covering his tracks. He roams through the northern Canadian woods, both American coasts and down to an offshore brothel in Rio. He alternates between computer work in the Corps compounds and menial jobs like a strip club bouncer in the pleeblands. Of one woman named Wynette, a “SecretBurgers meatslinger”.

He recalls, “Already she was beginning to emerge from the initial sex- induced coma created by him through the magic of his first contact-with-aliens, puppy-on-speed gonadal enthusiasm. . . Not to brag, but during their nightly tangles her eyes had rolled up so far into her head that she looked like the undead half the time. . . But now she was mistaking Zeb’s animal energies for something more profound. She wanted post-hump chat.”

Zeb is telling his tale, in segments, to Toby, the heroine of the second book of the trilogy, whom he marries in the third. She provides her own caustic commentary, to which he objects: “You laughing at me? Victim of a confused youth due to parental abuse? Plus, I grew too fast?”

“Matter of fact, you would. Heart like shale. What you need is a good fracking.”

In her trilogy, Atwood may be scoring political points against rampant capitalism but it goes down with a hefty dose of rollicking good humor. Read all three.

Phuket Events: Get revved up for the rally

Knocked out by Beatles in the Boat Lagoon