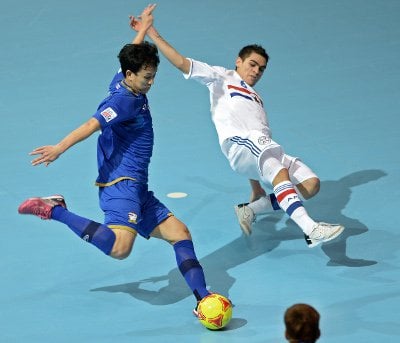 PHUKET: Despite losing two of their group stage matches, hosts of the FIFA Futsal World Cup 2012, Thailand, still have a chance to make history by advancing to the second round of the prestigious tournament.

If Thailand does advance, it would be the first time in its four appearances.

Going into the match last with a world ranking of 13, the ‘War Elephants’ lost 3-2 to the world’s number 10 side, Paraguay. in a match of missed chances at the Huamark Indoor Stadium in East Bankok.

As a result, Thailand were immediately demoted into 15th place.

Thailand fell 3-0 after only 10 minutes of play, but managed to claw the scoreline back to 3-2 in a game they should have… could have won.

Dangling at the bottom of the group, both Thailand and Paraguay needed to win to be sure of progressing to the second round.

Adolfo Salas put Paraguay in front after only 3 minutes and his goal was followed by Enmanuel Ayala scoring in the 6th minute and Juan Salas in the 9th minute.

The vocal Thai crowd were a bit shell shocked after this early set back but they still continued on with their vocal support, trying to push Thailand forward. Suphawut Thueanklang scored for Thailand in the 11h minute, bringing his side within a two goal margin into half time with a 3-1 scoreline.

Just four minutes into the second half, Thailand ‘s Jetsada Chudech scored to set up a nerve racking final 15 minutes for the home nation and their fans.

Thailand’s relentless attack served up a number of opportunities but their players could not capitalize on the tight Paraguayan defense.

The host nation finished the game with 64 per cent possession and had 45 shots compared to Paraguay’s 27.

The other game in Group A was an easy 6-1 win for top of the table Ukraine against Costa Rica, with Oleksandr Sorokin and Ievgen Rogachov both scoring twice. As undefeated Group A winners, Ukraine secured their passage to round two of the tournament, along with second place Paraguay.

Thailand could still qualify as one of the best third-placed teams (the best four out of six third placed teams will advance based on points, goals scored and goal differences) but they have to rely on other results.

Also in the evening, Brazil kept up their 100 per cent record against a disappointing Portugal team. Simi, Fernandinho and Neto scored for Brazil in their 3-1 win,while Cardinal found the net for Portugal.

Both teams progress to the second round: Brazil progress as Group C winners and Portugal go through as runners up despite their defeat. Japan needed to score 5 goals or more to automatically progress to the next round, but they could only manage a 4-2 win against bottom of the group Libya.

Japan had to wait until Reda Fathe scored in the 18th minute to break down a resolute Libya defense. Three second half goals by Hoshi, Inaba and Osodo helped Japan to victory. Even though they failed to automatically qualify, Japan should go through as one of the best third-placed teams.

With Groups A and C group stage competition complete, the final matches for Groups B and D will commence tonight as follows:

Group Stage will then commence tomorrow, November 9, with the final matches of Groups E and F as follows: