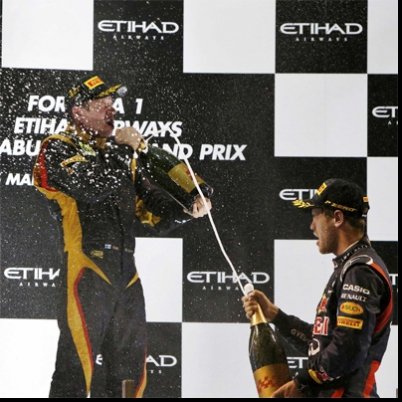 PHUKET: After qualifying the script for the Abu Dhabi race was clear; Lewis Hamilton would coast around to win. Sebastian Vettel, starting at the back would make no impression; Fernando Alonso would take his customary third, while Kimi Räikkönen and Jenson Button would take some good points.

It would be boring, but could open up both championships. I had fortified myself with roast lamb, and opened a bottle of indifferent red in anticipation of little entertainment.

Thus you find me, with little excitement, waiting for the off, seated beside my clerical acquaintance and his lady wife, my head of security at our feet and my son texting me from the track.

But somehow the script was forgotten, and Abu Dhabi became the most exciting race of the season. By the end I had dumped the indifferent red for a 12 year-old Double Wood Balvenie, was gripping the lady wife, and GSM had profited mightily from the texts with Number 1 son seated by turn 10.

We all know the result now, but I will quickly run across the race for the main teams.
Räikkönen took second place at the very start, overtaking Mark Webber and Pastor Maldonado, and inherited the lead when Hamilton’s gremlin stopped his petrol pump in lap 20.

The victory was Räikkönen’s first since 2009. He is the eighth driver to win this season.

Räikkönen was asked on the podium by McLaren ex-team mate David Coulthard, dressed in a suitable passé style, what it was like to win again. The Finn replied in his trademark laconic fashion: “Not much really.”

This was not his first terse observation of the day.

When Räikkönen’s engineer advised him of his lead, he unwisely offered advice and received the retort of one who had shrewdly signed a contract extension before the race: “Leave me alone, I know what to do”. His engineer is brave and pushed his luck by later reminding Räikkönen to warm his tyres. “Yes, yes, yes, I do it all the time.” The lady wife asked me: “Did he just tell them to **** Off?” He had.

When Räikkönen used the “F-word” on the podium, Coulthard felt obliged to clarify that English is not his first tongue. To viewers, Kimi sounded quite comfortable with the language. It is a brave or foolish interviewer that questions Räikkönen live. He then poured fizzy peach juice over an unsuspecting Coulthard, who pretended not to notice.

This is the first Lotus win since 1987. But today’s Lotus is the old Renault team, with whom Alonso won his 2005/2006 titles; still based at the disused quarry south of Enstone Airfield in Oxfordshire.

Kimi is 57 points behind Vettel in the Championship, so he cannot win overall. But Lotus is now a team to be reckoned with, and its clear Räikkönen is a driver to be reckoned with; by his team and interviewers as well as by competitors.

Alonso started sixth and finished second; a gritty drive in a miserable car. He is now only 10 points behind Vettel. Felipe Massa underperformed again.

For Vettel it was a lucky day. He started from the pit lane with a modified car, survived two early sets of front wing damage, one in a collision with a DRS Marker Board, which was clearly speeding under the safety car. He resumed the tail of the field after getting a new nose, and stormed up to second before making a second pit stop.

He then benefited vastly from the second safety car, hunted down Button in new shoes, overtook him three laps out, and took third. Now only Alonso can save us from a third consecutive Vettel Championship.

Webber had a bad day. He started second, battled for fourth after a miserable start, lost time in incidents with Maldonado and Massa, and was finally taken out in the Sergio Perez accident on lap 38.

Narain Karthikeyan made a spectacular exit on lap 8 when his hydraulics failed, triggering an extravagant accident with a tailgating Nico Rosberg flying over the top of his car. A ‘KERS’ problem kept Maldonado from a podium for Williams.

So it’s on to an all new and untested Austin next, at an unsociable hour, but more of that next week. I shall be accompanied by Evan Williams.

Futsal World Cup: Thailand may still qualify for second round despite losing