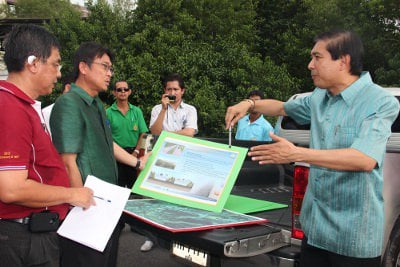 PHUKET: Phuket Governor Maitri Inthusut yesterday urged officials to complete the Klong Koh Pee flyover, which will traverse 600 meters of protected mangrove forest on the border of Phuket Town, as quickly as possible.

During an inspection visit to the site at Saphan Hin, officials told Governor Maitri that Cabinet had approved a budget of 170-million-baht for the project and that construction will begin next year.

However, Gov Maitri told officials that the allocated 480 days to complete the elevated road, which is expected to alleviate inbound traffic from the south of the island into Phuket Town, is “too long”.

“The people of Phuket have waited more than 10 years for this project because it was ‘stuck’ on the mangrove issue,” Governor Maitri explained.

“I think the construction period is too long as the work will not affect people’s daily lives while it is underway. The project should be completed quicker. The sooner it is finished, the sooner people’s [traffic] troubles will be relieved,” Gov Maitri said.

During the presentation to the governor, Teeraporn Jirarattanakorn, the director of the Department of Rural Roads Phuket office, explained that the planning stage has been completed, with the final plans signed off and approved.

“It will be a 600-meter, four-lane divided road with an elevated section 3.5 meters high and 510 meters long. The road will include a bicycle lane and a pedestrian walkway 1.8m wide and raised 20 centimeters higher than the road surface, with concrete railings on both sides,” Mr Teeraporn said.

The elevated road will be divided to keep traffic heading in different directions separated for safety reasons, he added.

“There will be a five-meter gap between the two [elevated] roads to allow light to get through to the mangrove forest below and the road, being elevated, will not affect the high and low tides,” Mr Teeraporn said.

Futsal World Cup: Thailand may still qualify for second round despite losing

Phuket Sports: IronKids by the kids