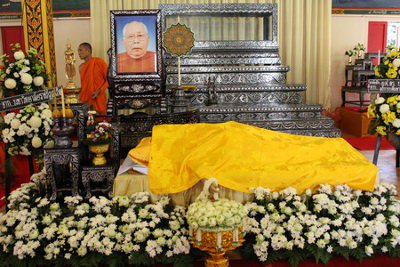 Phra Ajarn Lim was admitted to hospital on July 21, 2005, and he had been in and out of the hospital for some time. However, he spent nearly the last four years in the hospital.

Born as Mr Lim Sitthichok on April 5, 1925, in Tambon Bang Tao, an area now known as Cherng Talay, he was a son of Mr and Mrs Daeng and Kong Sitthichok.

Phra Ajarn Lim was ordained at Wat Chalong at 1pm on July 5, 1962, and given the name “Uttamuyano”, meaning “a man of deep wisdom”.

He attained the position Abbot of Wat Chalong in 1989.

In addition to the spiritual guidance he provided, Phra Ajarn Lim leaves behind a legacy of monuments at the temple, including the humbling “Phra Mahathat Chedi Phra Jom Thai Baramee Prakat”, also called “Chedi Wat Chalong”.

People may arrive to pay their respects until Tuesday, when a merit-making ceremony will bring the funeral service to a close.

Phra Ajarn Lim’s body will be kept at the temple for another 100 days.

The cremation ceremony is expected to be held on December 17 this year.