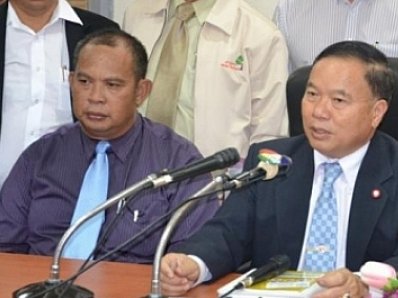 PHUKET: The mayor of Chalong handed a formal letter of complaint to Public Health Minister Witthaya Buranasiri for the ministry’s failure to provide 186 million baht in funding for the establishment of a new hospital.

The financial package, provisionally agreed to by the Cabinet at the mobile meeting on Phuket in March, was to turn the “Chalong Health Promoting Station” into a fully-functioning, 30-bed hospital, complete with ER facilities and medical staff accommodation.

In the letter presented to Mr Witthaya during a visit last week, Chalong Mayor Samran Jindapol asked for the budget request to upgrade the facility be granted, as the expansion plan to better serve residents and tourists in the Chalong, Rawai and Karon areas was still viable and moving forward.

“There are 40,000 to 50,000 people living in the Chalong area. This number doesn’t include foreign tourists, Burmese laborers or residents in Rawai and Karon,” Mayor Samran said.

“There are many accidents in the Chalong area and it takes too long to transport injured people to Vachira Hospital in Phuket Town – Chalong Hospital is needed,” he added.