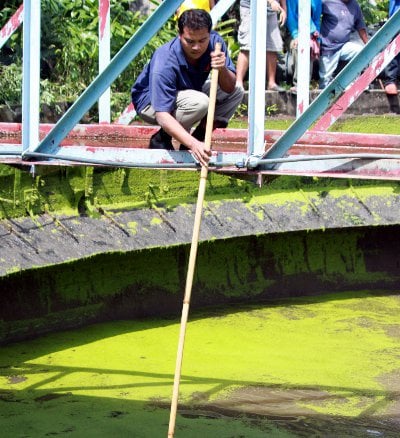 PHUKET: A six-year-old boy who went missing this morning was found drowned in a water treatment pool at the Patong Municipality Water Treatment Plant this afternoon.

The child, Yutthakarn “Marvin” Limtek, was staying with his aunt Siriwan Noothong, who lives near the water treatment plant on an unnamed soi that connects Rat-U-Thit 200 Pi and Phang Muang roads.

Ms Siriwan said Marvin’s father, Yutthana Limtek, 40, usually picked his son up early in the morning to take him to school, but was late today.

Mr Yutthana became a single parent after his wife abandoned him, about a year after Marvin was born, said Ms Siriwan.

Marvin went off to play near the treatment plant with an older boy. At around 10am the family realized he was missing.

A search for the boy started around 1pm.

Workers at the plant discovered the boy’s shoes floating on the algae-covered water’s surface of a treatment pool, 18 meters in diameter.

They drained about half of the four-meter-deep pool so they could stand inside and search for his body, which was recovered at around 2:30pm.

The boy’s family are still in an inconsolable state of shock.