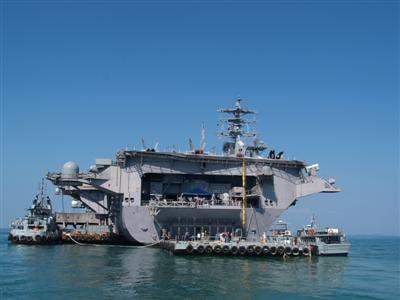 PHUKET TOWN: Thousands of US servicemen stationed aboard the USS Nimitz and its support vessels arrived in Phuket yesterday morning for five days of rest and relaxation.

Anxious to get off the 333-meter vessel after a month on board, sailors and marines quickly formed a long line extending almost the entire length of the hangar deck.

As enlisted men and women waited to catch one of three ferries shuttling the sailors ashore, about 20 members of the Phuket press corps were welcomed aboard for a comprehensive tour of the vessel that included the flight deck, bridge, control tower, operations and radar rooms and forecastle.

USS Nimitz Commander Adm John ‘Fozzie’ Miller and other top officers met the press at the base of the control tower on the flight deck, saying they were ‘delighted’ at getting the chance to visit Phuket and meet the Thai people.

He described Thais as ‘great friends’ of the American people.

All staff going ashore had been thoroughly briefed on a range of safety issues and were committed to being ‘good guests’ during their stay in Phuket, Adm Miller said.

Teams of volunteer US servicemen will take part in community relations or ‘Comrel’ projects at two local schools during the liberty leave, he said.

The Comrels are organized with the assistance of the Rotary Club of Patong Beach.

Today and tomorrow sailors from the USS Nimitz will paint the cafeteria at Baan Ao Nam Bor School in Ao Makham, near the Deep Sea Port.

Meanwhile, sailors from the escort vessels USS Pinckney and the USS Rentz will paint classrooms, hallways and fences at the Baan Sai Nam Yen School in Patong.

As part of the media tour, the press got to meet 20-year-old Ampika ‘Grace’ Raktabut, the only Thai among the 6,000 sailors on the three vessels.

Born in Chanthaburi, Ms Ampika moved to the US with her family in 1997 and currently works on a team that launches and recovers some 60 aircraft from the crowded flight deck. She joined the military on the advice of her now-deceased mother, who said it would be a good way for her to gain experience and see the world.

Ms Ampika, who was interviewed in both English and Thai, told the press she enlisted about a year ago, signing up for eight years.

She works 14-hour shifts daily without holidays for pay of about US$1,200 per month.

Now in her sixth month of an eight-month tour, Ms Ampika described the work as very difficult, but also very rewarding.

“It’s hard because all the equipment we use is at least 30 pounds,” said the diminutive sailor.

Relatives are flying in from Bangkok today and she hopes to spend time with them on some of the island’s beaches. It is her first time in Phuket, she said.

Ms Ampika said she had been teaching her friends some basic Thai in order to help them during their stay here. Most were looking forward to enjoying the nightlife, she said.

On the ferry ashore, the Gazette spoke to UN Navy Officers Lt Elizabeth Holland from Groton, Connecticut and Lt Mark Bryan from Ellaville, Georgia. Both are assigned to the Nimitz’s nuclear reactor room.

Noting that this particular part of the vessel was not included on the tour, the Gazette asked what their work station was like.

They described it as a windowless ‘steam room’ that was ‘very hot at the moment’.

The officers said they would check in at The Mangosteen resort and check out Thai boxing in Patong that night.

Other than that, their only objective was ‘to relax’, they said.

Once ashore, sailors found a number of vendors and taxi drivers eagerly awaiting their arrival.

Large bottles of ice-cold Heineken sold from Styrofoam coolers at 100 baht each were popular among the sailors, who are denied the right to drink on board.

Although there were free air-conditioned tour buses to Patong available, taxi drivers promised to get sailors to the west coast nightlife hub faster for US$80 (about 2,600 baht).

From Phuket to California by kayak