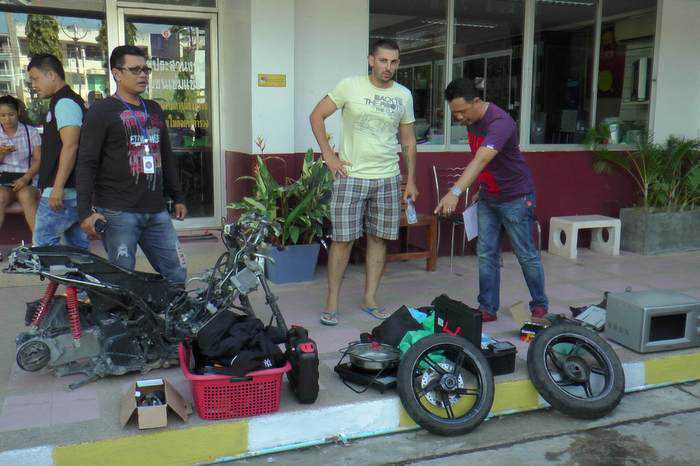 PHUKET: Police arrested a Frenchman in Patong today for the theft of a motorcycle that he stripped to re-build his own bike, which he then sold through a Phuket Facebook group.

Mathieu Alfano, 28, was arrested at his rental room on Phra Barami Road in Patong for the theft of a PCX150 Honda from Nanai Road on December 3.

“We received the complaint and reviewed CCTV footage that showed Mr Alfano and a woman stealing the motorbike,” Lt Col Sutthichai Tianpho of the Patong Police told the Phuket Gazette.

“We were told that the pair used to live in the apartment building the vehicle was stolen from, but moved out on November 28.”

While police searched for the suspects, officers received a report of a junked motorcycle that matched the description of the stolen one.

“He explained that he had stripped the stolen motorbike of parts and replaced parts on his own motorcycle that was the same make and model. He then posted it for sale on the Facebook group Phuket Motorbike and Car For Sale and Rent.”

The bike was allegedly sold for 40,000 baht to a foreigner who is training at a Muay Thai camp.

“We will call in the buyer, but have yet to press any charges against him,” Col Sutthichai said.

Police continue to search for the woman caught on CCTV, but declined to reveal her name.

“At this point, we think there could be several more people involved, and we don’t want to jeopardize the case,” Col Sutthichai said.