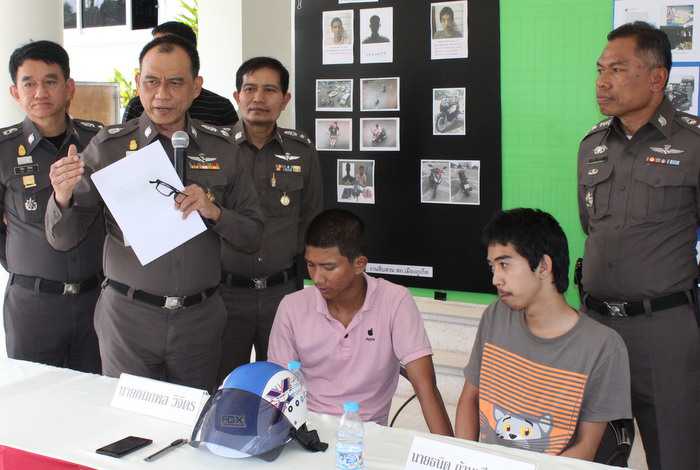 PHUKET: Police have arrested two teenagers who stole a motorbike out from under a 14-year-old after threatening to slash him with a box cutter in Phuket Town on Saturday night.

“Kanokpol Vijitr, 18, and a 17-year-old minor cut off the younger boy in the middle of the road and threatened him with a cutter,” Provincial Police Commander Patchara Boonyasit explained at a press conference yesterday.

“Lt Col Somsak Thongkliang and his team [from the Phuket City Police] were able to track down the stolen bike, which they found parked outside the Robinson department store.”

When the suspects returned to the bike, police presented their badges.

“However, only one of the two suspects was part of the robbery; the other was actually there to buy the stolen bike,” Maj Gen Patchara explained.

Police arrested both teens and obtained the address of the 17-year-old minor from the suspects before quickly making a third arrest.

Mr Kanokpol and the minor were charged for the theft, while Thanit Kantiengtam, 19, was charged for receiving stolen goods.