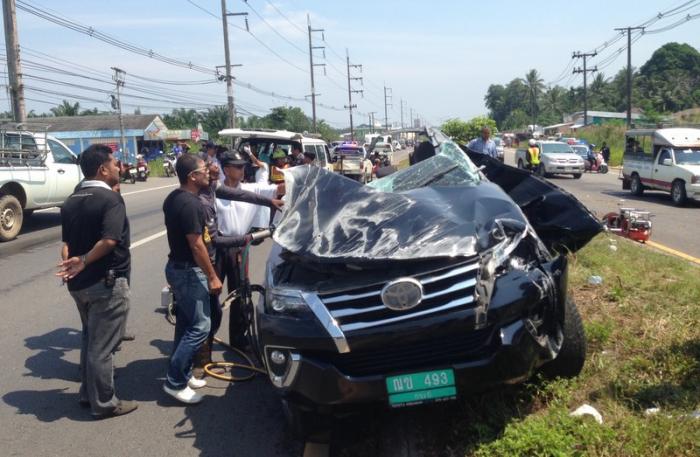 KRABI: Two French tourists and a Thai taxi driver were killed in a collision between an airport taxi and a 10-wheel-truck in Krabi yesterday afternoon.

The victims were Victoria Bureau, Betrice Bureau and Thanat Pankhwan.

Two other French tourists, namely Julien Remy Viallet and Alian Nicolas Bureau, as well as the driver of the 10-wheel-truck, Boonrit Senasamorn, were injured.

“The accident occurred on Petch Kasem Road. We found a severely damaged green-plate Toyota lying on the median, and a 10-wheeled truck that had flipped over on its side lying nearby,” said Lt Col Wichet Suvanno of Nue Khlong Police.

All victims were taken to Nue Khlong Hospital.

Eyewitnesses told police that the truck was heading from Nue Khlong district toward Khlong Thom. The driver ‘lost control’ at a bend in the road, crossed over the median, and hit the taxi.

The taxi driver was reportedly on the way to Krabi Airport to drop off the tourists.

Police said they are still investigating and have yet to charge anyone.

“We are waiting to get the truck driver’s statement as soon as he recovers and is able to answer questions,” said Col Wichet.