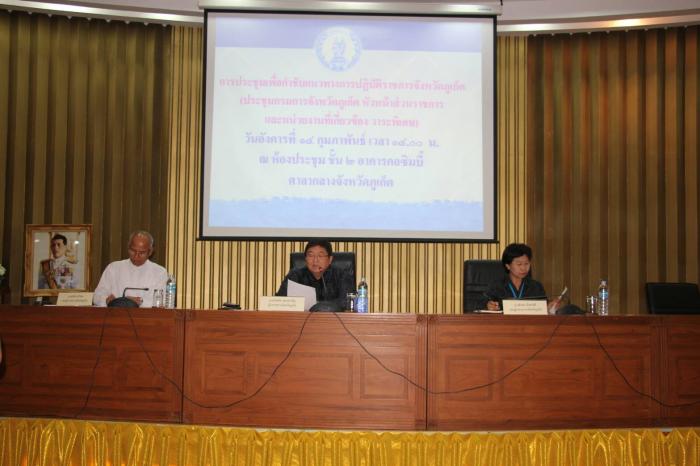 PHUKET: A Facebook post by the Anti-Corruption Organization of Thailand prompted an emergency meeting of the island’s top bosses yesterday to ‘investigate’ allegations of corruption laid against officials from major sectors of the government.

Phuket Governor Chokchai Dejamorthan, while insisting that he himslef had not accepted bribes, did launch an initiative called “White Phuket'”for the public to provide him with evidence or information regarding corruption (story here).

One of the examples of corruption that he mentioned in his post was the often heard complaint about demands from government officers for ‘tea money’ (bribes) to register migrant workers.

“It starts out with illegal workers being arrested and hauled down to a police station, but usually ends with officers asking for money to make the case ‘go away’. The ‘price’ for a Burmese worker is 20,000 baht. Businesses owners sometimes negotiate a monthly payment system, or in some areas, a group of shops make a collective arrangement to pay the amount,” Dr Mana stated.

He alleged that each sector has its own people to collect the bribes, including Civil Defence Volunteers and plainclothes policemen, adding that occasional arrests were made to please their bosses in Bangkok, but those too were a sham to enhance arrest statistics and for public relations purposes.

“Whether businesses register their workers or not, it is all the same. Even legally registered workers are intimidated by officers who park their police cars in front of the shop and stop them to ‘check’ their documentation. Many of them – even the legal ones – get scared and run away. They use other tactics too, like keeping the workers out in the sunlight for hours, all in the name of ‘verification’,” Dr Mana added.

He said that the same treatment extends to foreigners who work and invest in Phuket, such as hotels, tour companies, bar and club owners, restaurants, shopping centers, diving schools, language schools and vehicle rental businesses.

“We have estimated that 65 percent of hotels nationwide are illegal, but in Phuket that number is about 85 percent. Many hotels are encroaching on public land and hold illegal documents. Hotels built after 2011 disobey height restrictions and town planning laws. Officers are aware of this, but they receive bribes to close their eyes and ears,” said Dr Mana.

“There was even some talk that officers were asking for 2 million baht as the price to avoid processing the case further. A foreign businessman once told me, ‘I can’t stay in Thailand legally. Thai people have to pay [bribes] too, but foreigners have to pay more’.

“Even after the money is paid and they are granted permission to run their business, the officers come back later and arrest them for not having proper documentation. Now, foreigners are afraid to work in Thailand. A foreigner who has been staying in Thailand for 18 years told me that uniformed officers raided his company and threatened to arrest him if he did not pay 60,000 baht. He was afraid, so he negotiated down to 50,000 baht (5,000 baht per month for 10 months). Brown uniformed officers in Patong are rumored to earn up to 30 million baht per month.”

Dr Mana also alleged corruption in the 180mn baht Khong Katha reservoir and the 14mn baht, 4km bicycle lane in Suan Luang. Additionally, he said that bars in Patong were mixing ya bah (methamphetamines) into drinks, and that officers haven’t taken any action despite being aware of it.

“Many foreigners jump off buildings, supposedly from drug overdoses. However, there are many bars mixing ya bah in their drinks, which could be one of the factors driving these foreigners to suicide. Officers don’t care about these people’s lives or the damage to Thailand’s reputation – they only care about the money they can make,” alleged Dr Mana.

Dr Mana concluded his post by saying that nobody dared to step forward and state the truth for fear of repercussions, and that the only way to end this was for Phuketians to stand up for their rights and fight.

Gov Chokchai has asked relevant officers to “investigate” these allegations and report back to him by Friday.

“We will contact the person who posted this information to provide us with proof and more details. Everything will be done in a fair and transparent manner. If there is any truth to this, the person(s) responsible will face the full force of the law,” said Gov Chokchai.