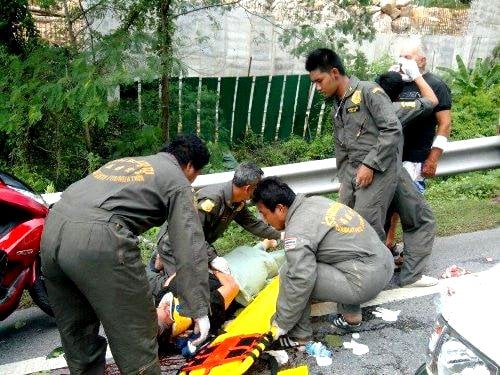 PHUKET: An unlucky pair of French tourists were enjoying a scenic motorbike ride along the road from Patong to Kamala on Saturday when they were struck down by a falling tree.

Ruamkatanyu Foundation Phuket workers rushed to the scene after being notified of the accident by Kamala Police at about 4:30pm.

“At the scene, we found the man had suffered only slight injuries, but the woman had suffered a head injury. Both were rushed to Patong Hospital,” one of the rescue workers told the Phuket Gazette.

The couple were identified as Thierry Tiguer, 65, and Catherine Arsaut, 55.

Hospital staff confirmed to the Gazette that the couple were transferred to Bangkok Hospital Phuket on Saturday afternoon.

“Mrs Arsaut suffered an injury to her mouth and to her right arm. She has to stay in the hospital’s care for further treatment,” a Bangkok Hospital nurse said.

“She also has a problem with her thyroid, but she is responding well to treatment,” the nurse added.

The nurse also confirmed that Mr Tiguer had not been admitted for hospital care.