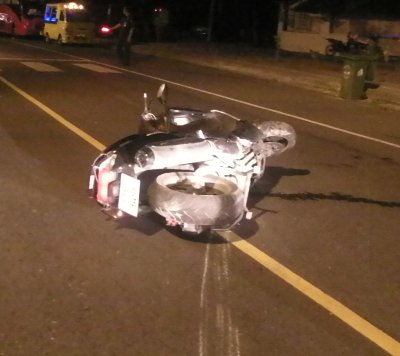 PHUKET: One French tourist is dead and another remains in a coma after the motorbike they were riding crashed on the beach road in Karon before dawn yesterday.

Chalong duty officer Boonlert Onklang said that police were informed of the accident, at a curved section of the beach road near the Hilton Phuket Arcadia Resort, at 3.40am.

Arriving at the scene, police were told by one of the resort’s security guards that he heard what sounded like a large motorbike heading toward Karon Circle, followed by a loud crash.

The guard ran to the scene to find two men lying off to one side of the road, their Yamaha 400 Majesty motorbike lying in the middle of the road.

Police found the body of Ludovic Didier Donny, 36, in a canal on the other side of a stone retaining wall, and the severely injured Jerome Sebastien Heras, 35, in a small concrete pond beside the wall.

Mr Heras, from Perpignan in France, was rushed to Vachira Phuket Hospital with multiple injuries. He has yet to regain consciousness.

Mr Donny, from Noisy-le-Sec, a suburb of Paris, died at the scene. His body was transported to the Vachira Phuket Hospital morgue.

The two tourists had arrived in Phuket the previous day, Col Boonlert said.

“Mr Donny received fatal injuries to his head. Mr Heras survived, but has cuts all over his body. His chances of survival are about 50-50,” he said.

“After examining the crash area, it appears that motorbike struck the curb before hitting the wall. We don’t know who was operating the motorbike.”

Police at the scene noted that neither man was wearing a helmet.

Mr Heras’ blood contained more than 200 parts per million of alcohol. Due to coagulation of the blood after death, the blood alcohol level of the late Mr Donny could not be checked, Col Boonlert said.

“The French Embassy has been informed of the incident,” he added.