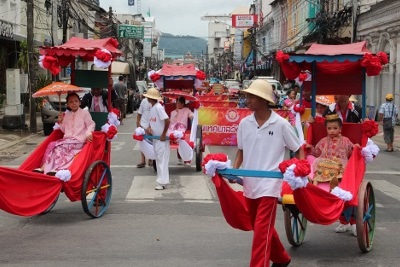 PHUKET: The new director of the Tourism Authority of Thailand (TAT) Phuket office is drawing up plans to push Phuket’s cultural festivals after witnessing his first Por Tor festival in Phuket.

Director Chanchai Doungjit told the Phuket Gazette this morning that he is devising a four-year plan to bring tourists in from around the world by expressly focusing on Phuket’s cultural festivals.

“I have already sent information about Phuket’s festivals to TAT offices all around the world. I will focus on Asian tourists at first; they are able to relate more easily to our culture and have a better understanding of our festivals,” Mr Chanchai said.

“In the coming year, I will make sure media outlets from around the world are invited to witness these festivals for themselves, so they can report back in their home countries and inspire people to come and join these events,” he added.

Although he has yet to set any target figures, Mr Chanchai said he expected a good return on the promotion strategy.

“Thai culture is one of the biggest attractions for tourists coming to Thailand, and Phuket has unique festivals that are celebrated in a way different from anywhere else in the country. The Por Tor Festival and the Vegetarian Festival are perfect examples of this,” he said.

Mr Chanchai’s comments follow his attendance at the opening parade for the Por Tor festival in Phuket Town on Sunday.

The procession started at Queen Sirikit Park on Thalang Road at 11:30am. It passed along Thalang Road, Yaowarat Road, and Phang Nga Road, then through the Standard Chartered Bank Junction and along Rassada Road before reaching its destination, the municipal market on Ranong Road, where the main festivities are taking place until September 15.

At the festival’s opening ceremony, Phuket City Mayor Somjai Suwansupana explained, “The Por Tor Festival is a Phuket tradition that has been passed down for many generations. Chinese people believe that worshiping their ancestors who passed away during this time of the year will bring them luck, as well as longer and healthier lives.”

Unlike the Hungry Ghost festival celebrated by Straits Chinese elsewhere along the Malay Peninsula, the Phuket version of the festival is centered around honoring the turtle as the symbol for long life.

The Chinese in Phuket honor a “red turtle”, with red being the color for good luck.

As such, during the procession on Sunday, devotees transported a large cake in the shape of a huge red turtle, which on reaching its destination at the market on Ranong Road was cut into pieces that were handed out to people as a way of making merit.

Mayor Somjai also explained that another street procession will be held this coming Sunday, September 9.

The procession will start at the Saphan Hin Mining Monument at 9am. The parade route will be along Phuket Road, Kra Road and Takuatung Road to the finish at the Bang Neaw Shrine, which is also called the Por Tor Kong Shrine.

Mr Chanchai was impressed by the proceedings he witnessed.

“This is a beautiful tradition with a long history, and should be preserved and promoted to people throughout the world. This festival is a good activity for Phuket during the ‘Green Season’ [our low season for tourism’],”he said.