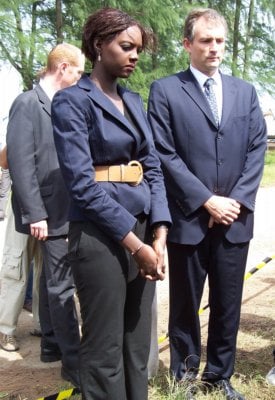 PHUKET AIRPORT: A French delegation arrived in Phuket this morning to mourn the loss of 10 French nationals killed in Sunday’s One-Two-Go plane crash.

Led by Rama Yade, Minister of State responsible for foreign affairs and human rights, the group arrived at the airport at 9:30 am and placed flowers before a metal storage container housing the bodies of 10 victims, all known or thought to be French nationals.

Miss Yada was also briefed on the process used to identify and claim the remains of victims killed in the disaster, in which 89 passengers and crew died.

The identities of six French victims have been confirmed by Phuket Immigration Police by their travel documents. They were identified as Henry Macaire and his wife Fermina Macaire, Laetitia Gambu, Thibaud Lamere, Jacques Marnef and Alain Benbaron.

The identities of four other victims traveling in the same group are thought to be French, but their identities have yet to be confirmed.

Buddhist, Islamic and Christian religious rites were conducted at the crash site yesterday afternoon. Another Buddhist ceremony was held this afternoon inviting the souls of the deceased to leave the crash site for a better final resting place. A service was held today for Jewish victims.

State of Israel Chief Medical Examiner Prof J Hiss, who arrived in Phuket with his team yesterday, said that seven of the eight Israeli victims had been identified and that they were still working to identify the last victim, a woman.

The atmosphere was subdued today at the Phuket Airport Hall, where officers from the Royal Thai Police Thailand Disaster Victim Identification (TDVI) program were working to identify bodies.

Of the 53 foreign victims, only three have been claimed by relatives and returned to their homelands.