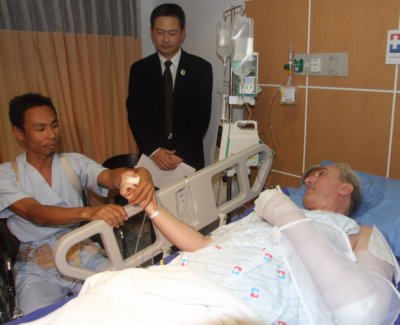 PHUKET CITY: Australian Robert Borland, who was pulled from the burning wreckage of One-Two-Go Flight OG269 on Sunday by a “man in a yellow shirt”, finally had a chance to thank his savior in a meeting arranged yesterday afternoon by the staff of Bangkok Phuket Hospital, where both men are being treated for injuries sustained in the crash.

The hero was identified as Paiboon Phaphan, a 39-year-old air-conditioner mechanic and resident of Village 3, Tambon Pa Khlok, Thalang.

K. Paiboon, who suffered a back injury and walked to the meeting supported by a brace, told the Gazette in a weak voice that he was not a regular flyer and was returning from Bangkok with his boss at the time of the accident.

“I am still afraid to fly now. I think it will take some time before I will be able to fly again,” he said.

Mr Borland, 48, a 10-year resident of Phuket and a tsunami survivor, suffered a broken bone in his back and was trampled by passengers desperate to escape the burning fuselage. Thanks to K. Paiboon, he was among the last to make it out of the plane alive.

“Other people were trying to escape, and many of them were stepping over and on top of me. I was also on fire. My trousers were burning… I couldn’t get out of the aircraft, but I think there was a Thai man and he had a yellow shirt on; he dragged me through the emergency exit and onto the wing.

“Because the wing was slippery, I slid off it and fell to the ground. I was seated in the aircraft’s midsection, near the wing and the emergency exit, which was quite lucky for me,” he told the Gazette earlier.

After meeting Mr Borland, K. Paiboon recounted his own memory of the chaos. “It was raining very hard and the landing was very hard, much harder than usual, so I put my head down and braced myself against the seat in front of me,” he said.

“After we crashed with a loud bang everything went dark and a fire broke out in front of me. Then I heard a farang behind me and I saw him push open the emergency exit door.

“I was able to breath only twice because the air was burning my nose. When I managed to get out I was standing on the wing and I saw many passengers following me.”

K. Paiboon said he waited on the wing until his boss, K. Chaowalert, and his son Jumbo had escaped.

After they had safely made it out he noticed Mr Borland, with his legs on fire. Ignoring his own bleeding head wound, K. Paiboon pulled Mr Borland out onto the wing before looking back inside for more survivors.

When he looked back, Mr Borland was gone so he assumed he had slid off the wing and fallen to the ground.

Also, Jumbo became stuck in the mud below when fell off the wing. K. Paiboon pulled he boy to safety and then went to look for the boy’s mother, who was thought to be still inside the plane.

“I called but nobody answered, then the fire trucks began to arrive and they told me to come down,” he said.

K. Paiboon said he feels better now and has been cleared to leave the hospital, but will stay for a week to receive the physical therapy he needs because it is too difficult for him to travel back and forth from home in his condition.

K. Paiboon’s mother told Gazette that her son, a former soldier, had always been a good son and liked to help other people.