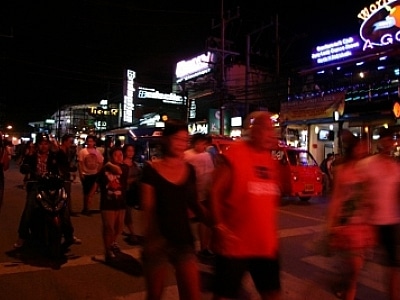 PHUKET: Excellent field work by Phuket Tourist Police Volunteers has led to the rescue of two preteen French girls thought to have been living on the streets of Phuket for up to eight months.

Details are limited, but the 11-year-old has already been rescued and repatriated to France by French social services to live with her grandmother, who instigated the search for them.

The search for the second girl ended at about 11pm last night when sharp-eyed volunteer Narada Hanks spotted a girl matching the description of the 12-year-old walking along the infamous Soi Bangla in Patong.

She spotted the girl as she walking up Soi Bangla, near Soi Crocodile, wearing a long dress and talking to three men.

After approaching the girl and beginning a conversation that confirmed her as the missing girl, Mrs Narada escorted her to the Phawadee Hotel run by Phuket Tourist Police Foreign Volunteer supervisor Claude de Crissey and his wife.

She was accompanied by fellow volunteers Omar Al Quraiani of Jordan and Italian national Sergio Bongiovanni.

Mrs Narada, originally from Kamphaengphet province, told the Gazette she did not press the girl for information about why she was on Soi Bangla so late for fear of losing her trust. Her only goal was to get the girl to safety, she said.

Mr de Crissey, a Frenchman, was able to converse with the ethnic Arabic girl in her native tongue.

The girl told the volunteers she had been staying with two Thai friends in Kathu Municipality and they planned to come and pick her up to bring her home at 1am.

When she said she was tired and hungry, she was given a meal of steak and spaghetti and then put to bed. She remains under the watchful eyes of the resort staff today, while her repatriation is being organized by Thai and French officials.

Details about how the girls ended up on the street remain few, but it appears that the girls’ mother died about five years ago and her father was unable to care for them. He is rumored to be in prison.

Names and images of the two girls are being withheld to protect their privacy.

More details are expected to be released soon.