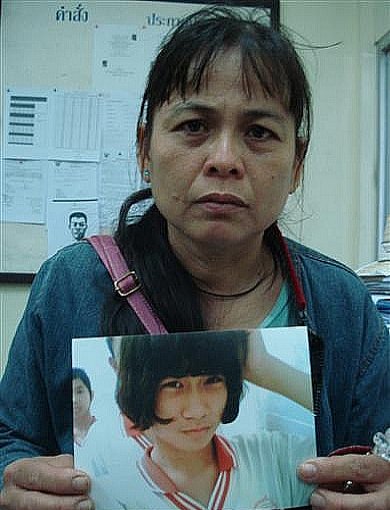 PHUKET: A distressed mother is appealing to the Phuket public for help in finding her 12-year-old daughter, who has been missing since Tuesday.

She told reporters that Nong Pin, in her last year of primary at the Ban Talaad Neua School in Phuket Town, was last seen on Tuesday leaving an internet cafe at the mouth of Soi Lor Rong in Phuket Town.

Nong Pin, who lives with her grandparents in Wichit because her parents are separated, is known to have skipped school that day and gone to an internet cafe “to do homework”.

Like many local youths, Nong Pin is an avid user of the social networking website Facebook, where she has over 250 friends and goes by the user name “Pinnee Smile”.

CCTV images of Nong Pin recorded on Tuesday showed her coming and going from the internet cafe several times. As she left the last time she was unaccompanied and did not appear to be under any stress or in a hurry.

However, her mother fears Nong Pin may have fallen victim to an internet stalker and is pleading to the public for help in locating her.

“I fear she may have been kidnapped,” she said.

The first fortune teller, in the family’s original home of Prachuap Khiri Khan, sensed the schoolgirl was likely on holiday with a wealthy “tomboy” (lesbian with masculine traits) in Bangkok.

The second fortune teller, from Phuket, said he had a vision that Nong Pin was approached in the internet cafe by a man named “Dum”, who serves as a ma song spirit medium at a local Chinese Shrine. She consented when Dum asked her to go with him, the fortune teller said.

As of 9:15am today Nong Pin had yet to contact friends or family.

Are United’s modern glory days over?