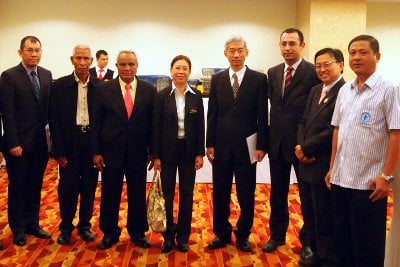 PHUKET: A consortium of Phuket and Krabi tourism representatives have just returned from the Middle East where they spearheaded a road show to boost tourists’ confidence in visiting Thailand.

“The floods scared so many tourists who planned to visit Thailand. Many of them even canceled their trips since they thought it was that bad,” said Phuket Provincial Administration Organization (OrBorJor) President Paiboon Upatising.

“The images [of the floods in Bangkok] sent out by the international media worried many tourists, especially the images of airplanes standing in water at Don Mueang Airport,” Mr Paiboon added.

The main objective of the road show, held in Dubai, UAE, and in Doha, Qatar, on November 28 to December 1, was to restore tourists’ confidence in visiting Thailand, particularly Phuket and Krabi.

In spreading the message, Mr Paiboon and other Phuket OrBorJor officials joined with senior members of the Phuket and the Krabi tourist associations and representatives from the Tourism Authority of Thailand.

“This road show was very successful. There are many people interested in Phuket. Part of the reason is because there is a direct flight from Doha to Phuket provided by Qatar Airways,” he said.

“The Middle Eastern tourist market in Phuket has grown 100 per cent. We would like to maintain the number of tourists coming from this region. This group of tourists can be our main target market during the [tourism] low season,” he added.

Krabi Tourism Association Vice President Ittarit Ginglek voiced his confidence [in the road show] for the impact on boosting the number of visitors to Krabi province.

“We had a lot of people interested in Krabi. Although there is no direct flight from the Middle East [to Krabi], we are close enough to Phuket that we can attract people to come.

“We have a big international airport that can accommodate Boeing 747-400s. We also have many different types of accommodation, and we have our certified Halal food project up and running, which caters to tourists from this region.

“The bottom line is, we are ready to welcome Middle Eastern tourists,” he said.