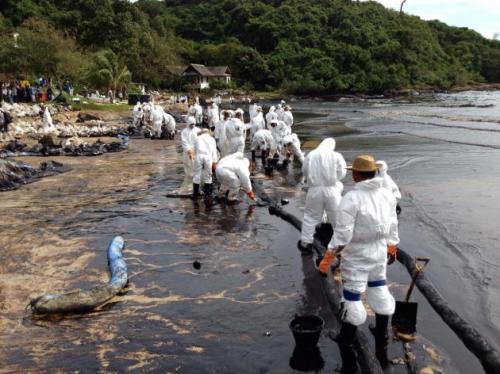 The island’s Ao Phrao (Phrao Bay) is being closed for three days to permit a cleanup of spilled crude oil that has washed ashore.

Koh Samet was yesterday declared a marine disaster area, according to Rayong Governor Wichit Chatphaisit, who said action was being taken to prevent the leaked oil from spreading from Ao Phrao to other beaches on the island.

“The spill is definitely having an impact on the environment, but we have not detected any deaths of marine animals yet,” he said.

It is expected to take about 15 days to restore the polluted beach of Ao Phrao, according to Sumet Saithong, chief of the Laem Ya Samet Islands National Park.

He said about 500 officials from the Pollution Control Department; Depart-ment of Environment Quality Promotion; petrochemical firm PTT Global Chemical, from whose pipeline the oil leaked; and those sent by the Rayong provincial governor, were cleaning up oil that had washed ashore.

Film from the floating crude oil has spread over eight kilometres west of Ao Phrao, on the western coast of Samet, and about 400 metres into the bay, he said.

The Stop Global Warming Association yesterday asked the government to demand compensation from PTT for allegedly causing damage to the country’s natural resources and the environment. It would take legal action by itself if the government failed to do so, the association’s representatives said.

Koh Samet, about 3 kilometres off the coast of Rayong, is a popular getaway for Bangkok residents. The island attracts about 1 million visitors a year, mostly on weekends. Known for its quieter scene and serene beach, Ao Phrao is now blackened by waves of oil lapping on the shore.

The leak reportedly struck an offshore pipeline belonging to PTT Global Chemical on Saturday morning, releasing about 50,000 litres of crude oil into the Gulf of Thailand. The pipe is about 20 kilometres off Rayong’s coast. Authorities had contained much of the oil spill by Saturday evening, although portions evaded the floating barriers used to try to contain the spill.

“We closed off Ao Phrao to tourists so authorities can clean up the water and beach,” said Chuchart Oncharoen, the Tourism Authority of Thailand’s director for Rayong. “Ao Phrao is on the west coast of Samet, but most of the island’s hotels and resorts are on the east coast, which has not been affected by the spill,” he said.

Rayong Deputy Governor Supeepat Chongpanish said the immediate priority was to clean the oil from the sand and water, and to make sure the spill didn’t spread to other beaches. “This is a very beautiful, white, sandy beach, so we want to clean up the spill as soon as possible,” he said.

Authorities said it would take some time to assess the environmental damage caused by the spill. However, the tourism industry has already felt some impact.

“The black waves have been rolling in since [Sunday] night and by [yesterday] morning the beach was all tainted with oil,” Kevin Wikul, the assistant front-desk officer of a resort in Ao Phrao, was quoted as saying by The Associated Press. “We have advised our guests against going near the beach and some have asked for early check-outs.”

Chuchart, TAT’s Rayong director, said: “We’ve had some hotel cancellations on Samet. Whether this will have a long-term impact on the island depends on how quickly PTT cleans the mess up.”

According to the company, hundreds of soldiers are helping in the effort to remove oil from the beach. However, it would take some time before oil slicks on the sand and between stones could be removed, it said.

Energy Minister Pongsak Ruktapong-pisal said the ministry had set up a fact-finding committee headed by PTTGC chairman Prasert Bunsumpun to determine the cause of the oil leak. He said it was the fourth oil spill to have hit Thailand, and the largest in terms of the amount spilled.

Prasert expressed regret over the incident, adding that the company would determine the cause as soon as possible.


Foreigners ‘had a hand in Thaksin death-threat clip’
The Nation / Phuket Gazette
PHUKET: Deputy Prime Minister Pracha Promnog yesterday said anti-government groups with both Thai and foreign members were responsible for a YouTube clip in which a death threat was issued against ex-PM Thaksin Shinawatra by a man dressed to look like a terrorist.

Pracha refused to reveal the nationality of the suspected foreigners, saying it could damage bilateral relations, though he insisted they did not come from Malaysia.

Meanwhile, intelligence officials have obtained information identifying the three men in the clip, two of whom had their faces covered and were armed with assault rifles. He said police would first check with intelligence community sources in several countries before deciding whether to prosecute those featured in the clip, especially since one of the men revealed his face.


Pheu Thai to push emergency decree ahead of amnesty bill
The Nation / Phuket Gazette
PHUKET: Pheu Thai Party’s Strategic Committee will propose the imposition of the Internal Security Act to control any protest after the Parliament reopens, a source said after the panel’s meeting yesterday.

The committee will consult with police about the issue first before proposing it to the government, the unnamed source said.

Meanwhile, security at Parliament and Government House was beefed up yesterday as a precaution against protesters, as the controversial amnesty bill is tabled next Wednesday. Concrete barriers were placed at all entrances and exits of Government House yesterday in a move to keep out the Pitak Siam group, which is expected to show up on Sunday morning.

A police truck was also seen parked nearby along with a vehicle armed with a long-range acoustic device that emits an ear-splitting siren.

Two police tents were also set up and a photograph of the group’s leader posted on a metal barricade near one of the tents.

However, police said it was not a “wanted” poster. Deputy House Speaker Wisut Chainarun said 700 police would be deployed near Parliament on the days the controversial bill is debated.


Pension Network lodges complaint over failure to launch savings plan
The Nation / Phuket Gazette
PHUKET: The Pension Network for the People Sector is stepping up pressure on the government to demand that it start the National Savings Fund (NSF) scheme before the end of 2013.

Yesterday, the group lodged a complaint at the Central Administrative Court against Prime Minister Yingl