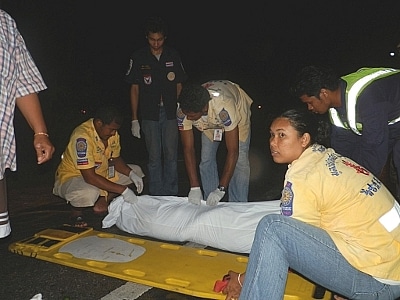 PHUKET: A motorbike passenger was killed last night when her driver swerved to avoid a fallen branch, putting the vehicle in the path of a fast-moving pick-up truck in the north of Phuket.

Tah Chat Chai Police were notified of the accident on Thepkrasattri Road southbound at 9:25pm.

Arriving a the scene, just 50 meters from the Thepkrasattri Bridge off-ramp, police found the body of 57-year-old Lamied Thongthip on the pavement.

Also at the scene was her driver, 35-year-old Sawaeng Boonthai, as well as the driver of a Bangkok-registered pick-up that hit them from behind.

Mr Sawaeng told police and rescue workers that he was driving his neighbor Mrs Lamied home from business in Khok Kloy, Phang Nga when he swerved suddenly to avoid a branch that had fallen from a tree onto the roadway during a storm that hit the area yesterday.

Mrs Lamied died instantly of head trauma when she was thrown off the motorbike and her head struck the pavement. She was not wearing a crash helmet.

The pick-up that hit them was only slightly damaged, but the Phang Nga-registered motorbike appeared to be damaged beyond repair.

Mrs Lamied’s daughter and another neighbor arrived at the scene as Phuket Kusoldharm Foundation workers prepared the body for transport to Thalang Hospital, where it will be held for further examination and storage until funeral arrangements are made.