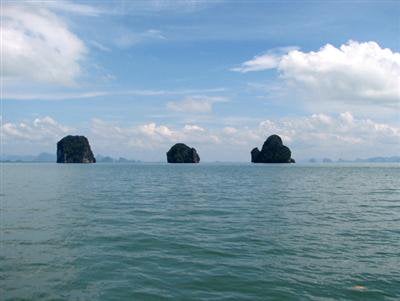 PHUKET CITY: Salvage workers are today trying to tow back to Phuket the unregistered passenger ferry that foundered in heavy seas in Phang Nga Bay over the weekend.

Phuket Marine Police on Sunday morning rescued the captain and crew of the unregistered ferry Kacha Marine, which sank during a sea squall near the Mu Sung Rocks about seven miles off Phuket.

Phuket Marine Police Inspector Wallop Puangpaka said his office first received a report of the sinking from fisherman at about 10am on Sunday.

They immediately dispatched a speedboat to rescue the survivors, who were waiting in a rubber raft when they arrived.

The crew were safely returned to Ao Por Pier by 1pm.

There were no passengers on board at the time, as the modified fishing boat had already dropped 25 tourists off at the island and was returning with just the captain and four crew members when the storm hit.

The crew told police the 22-meter ferry got caught in high seas and heavy rain, taking on seawater slowly.

The wooden-hulled Kacha Marine is owned by Kacha Marine Company, based at the Asia Marine Pier in Tambon Rassada.

Like most ferries to the Phi Phi Islands from Phuket, it operated out of Rassada Harbour.

Songchai Na Nakorn, an inspector with the Phuket Marine Transport Office, said the Kacha Marine was originally built as a fishing boat.

About three months ago it was modified to serve as a ferry with a rated maximum passenger capacity of 40.

The Marine Office inspected the ferry, but found its upper half-deck twice the allowable height limit at five feet.

The owners had already complied with an order to reduce the height by 2.5 meters and passed the subsequent inspection, but the company was still without a ferry license at the time of the sinking.

The company will have to pay a fine of up to 10,000 baht for operating without a license, but will not be prosecuted further because the rainstorm, not negligence, has been ruled as the cause of the sinking. The vessel also had all of the required safety equipment aboard, Mr Songchai said.

However, the Department of Disaster Prevention and Mitigation in Phuket had issued a weather alert warning fishermen and small vessels to remain in port over the weekend due to stormy conditions.

Kacha Marine workers on Monday inspected the vessel and found it still floating near the surface, relatively undamaged, with 600 liters of fuel still in the tank.

They say they hope to get the vessel back to Phuket by nightfall today.