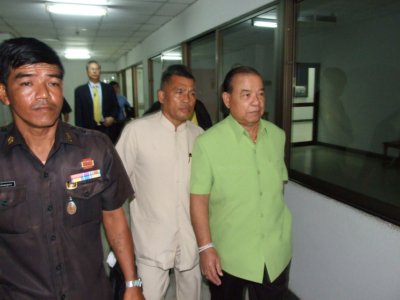 BANGKOK (Nation, Kom Chad Luek, TNA): Chalerm Phromlert, who was Phuket Governor from 1987 to 1991, was sent to Pathum Thani Prison yesterday after the Supreme Court upheld his 36-year jail sentence for multiple counts of statutory rape.

Judge Samart Ardnarong handed down the verdict against Chalerm, who was accused of having sex with four schoolgirls aged between 13 and 16 at a motel in a Bangkok suburb from November 2000 to January 2001.

One of the girls testified that she and the other girls willingly engaged in sex with “Pa Chalerm” for 5,000 baht each.

The girls went to him in succession, each spending two or three minutes with him, the court heard.

Chalerm’s case came to light after one of the girls, aged 14, failed to return home for two days because she was afraid of what her parents’ reaction would be if they learned she had turned to prostitution.

Chalerm’s arrest came while he was serving as deputy speaker of the senate, representing Surat Thani province.

In handing down its ruling, the court said Chalerm was clearly guilty; as a prominent person who knew his actions were illegal, his appeal did not carry sufficient weight to clear him.

In 2002, the Criminal Court found Chalerm guilty of four counts of statutory rape.

After being sentenced to four years in prison for each count, Chalerm posted 1 million baht in assets as bail.

Rather than overturn the decision or reduce the sentence, the Appeals Court in 2005 added 20 years to Chalerm’s 16-year sentence – an extra five years for each of the four counts of molestation that the Criminal Court had not factored into its punishment.

Chalerm entered the court yesterday a free man, having been released on 2.5-million-baht bail pending his appeal to the Supreme Court.

Already in his early 70s, Chalerm now faces spending the rest of his life behind bars.