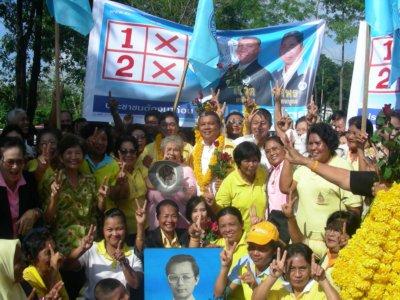 PHUKET CITY: Crowds of supporters turned out to cheer Phuket’s national political party representatives as they registered their candidacies and drew lots to be assigned their ballot numbers at Phuket Community Hall on Monday.

Eight candidates representing four of the five political parties running in the December 23 national election turned out on the first day of registration.

Each of the five parties is represented by two candidates in Phuket.

Phuket Representatives for the Democrat Party are Tossaporn Thepabutr and Rewat Areerob, who drew ballot numbers 1 and 2, respectively.

Phuket Representatives for the Palang Prachachon, the second to draw lots on the day, are former Thai Rak Thai representatives Dr Sriyada Shinawatra and Wisut Santikul. They drew ballot numbers 5 and 6, respectively.

Puea Pandin Party representatives were set to register their candidacy and draw lots for their ballot numbers tomorrow.