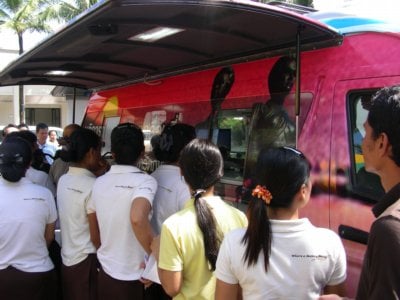 Phuket Governor Niran Kalayanamit cut the ribbon to officially launch Phuket’s high-tech Mobile Registration Service Van on November 8 in the car park of the BanThai Beach Resort & Spa in Patong, which donated the new diesel Toyota Hiace to the project.

The main goal of the project, the first of its kind in Thailand, is to register as many as possible of the estimated 300,000 migrant Thais who now call Phuket home, but who are officially residents of other provinces.

With about only half of the Thais living in Phuket registered, Phuket loses out annually on budget allotments from the central government that are based on population, including in critical areas such as education and law enforcement.

The Internet-enabled van is fitted with equipment valued at 4.6 million baht, much of it funded by local administration organizations and corporate donations.

Officials are still negotiating with TOT about the rate for the satellite link that allows the van’s computers to upload information directly to the Interior Ministry database in Bangkok.

However, the TOT will provide the link free for three months from December 3.

Services initially available from the van will include Thai ID cards, change of house registration information, birth and death certificates and change of one’s name.

The service may be expanded to include employment law and other legal advice in the future.

Gov Niran, who conceived and initiated the project, also hopes to acquire funding for more mobile registration vans in the future.

The project is administered jointly by the Phuket Provincial Administration Office (OrBorJor) and Phuket’s three district offices: Muang, Thalang and Kathu, all of which offer the same services provided by the van.

The Gazette will publish the van’s itinerary as soon as it becomes available.