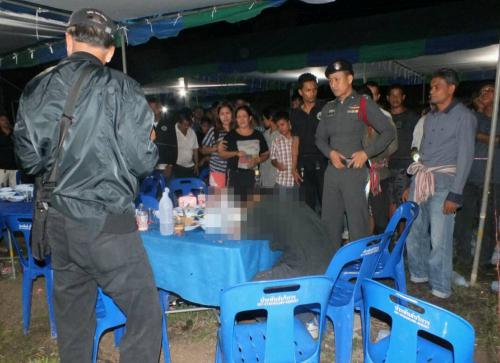 PHUKET: A former Phang Nga official was assassinated by a single bullet to the head while dining at his cousin’s funeral in Ao Luek, Krabi, early yesterday morning.

Sittipon Thongkum, 49, was shot dead while sitting down to eat with relatives at the funeral of Somchok Khammee’s brother. Mr Somchok is village headman of Moo 2, Khao Yai, in Krabi.

“People said they heard a single bang, like a firecracker going off. The next thing they knew Mr Sittipon fell face down, dead on the table,” said Lt Panomporn Panmad of the Ao Luek Police.

No witnesses were able to give any description of the killer to police.

“After the gunshot, everyone at the funeral dived to the ground for cover,” Lt Panomporn said.

Officers scoured the woods nearby.

“We found a balaclava we believe belonged to the gunman, but we did not find any bullet casings,” Lt Panomporn reported.

Mr Sittipon was a former president of the Marui Tambon Administrative Organization (OrBorTor) in Thap Put District, across the provincial border in Phang Nga.

“He was also a former village headman of Moo 6 in Baan Marui,” Lt Panomporn added.

Police believe the assassination was a revenge killing.

“Mr Sittipon had a reputation as a ‘tough guy’. He was kicked out of his position as village headman five years ago,” Lt Panomporn explained.

“We think that Mr Sittipon had a conflict with someone who may have acted out of revenge,” he said.

“In April, his friend, the president of Na Nuea OrBorTor, was shot,” Lt Panomporn added.

Officers are continuing their investigation into yesterday’s murder.

“We have the balaclava and we are still questioning witnesses with the hope of arresting the killer,” Lt Panomporn said.