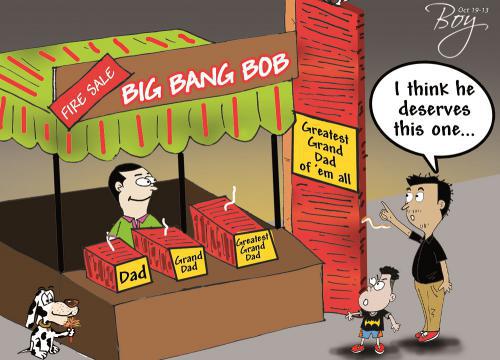 PHUKET: Credit must be given where it is clearly due: to the authorities who arrested more than 20 people for the illegal use or sale of dangerous fireworks during the recently concluded Vegetarian Festival (story here).

The Phuket Provincial Police have sent out somewhat mixed signals in recent years with regard to what level of fireworks usage would be allowed during traditional cultural festivities, many of which are connected to the island’s heritage and deep links to China.

In general, the message over the past decade has been that traditional firecrackers in strips would be acceptable, while anything larger or with more explosive power would not.

Any Phuket resident who has observed these firework-centric traditions can testify that the enforcement of regulations on the island has been mostly nonexistent – until now. In past years at this time there were reports of victims, many of them young children, who lost an eye, finger or ear drum due to these dangerous explosives.

A simple ‘cost-benefit’ analysis on the use of fireworks needs to be performed. Let’s look at the benefits first. There is the belief that these pyrotechnics might be useful at warding off evil spirits. And we are told that firecrackers and fireworks in general are an important part of the cultural and religious traditions of China. By association, they are an important way for Phuket’s Chinese population to express their reverence for and identification with such traditions.

Yet ancestor worship is another vital Chinese tradition, and one that extends much further back than firecrackers. Surely Chinese culture and tradition is much older and more grand than is warranted by association with noisy, toxic explosives.

On the ‘cost’ side, there is not enough space here to even begin an accurate accounting. Apart from all the people who have been maimed or even killed, the Chinese fireworks industry is almost completely unregulated and a well-known source of not only noise pollution, but also a producer of toxic fumes from a variety of elements that include strontium, dioxins, aluminum and other particulates – hardly substances that the well-intended spirit of any ancestor would wish to see ingested by his descendants.

And in this age of global warming and “sufficiency economy” any discussion of the costs also has to take into account the preposterousness of the mass production, shipping and sale of a product which has as its sole purpose the creation of noise for very short-term excitement.

There is no denying the importance of Chinese traditions in the development of Phuket’s own culture. However, despite the Vegetarian Festival being an important event that relies heavily on the use of explosives, it and all other similar events relying on noise, pollution and danger to create ‘excitement’ needs to be more tightly controlled for the benefit of all island residents.”