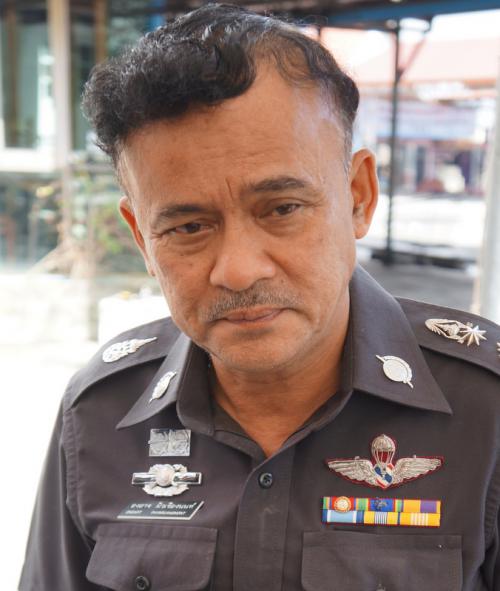 Here he talks about why his priority is eradicating drugs from Phuket, and why gambling should be legalized.

PHUKET: When I arrived in Phuket, I saw the most beautiful vistas I’ve ever seen – the gorgeous beaches here. Phuket is a world-famous tourist destination because of these beaches, and generates a lot of income for Thailand through tourism. That’s why the first thing I’ll do is focus on tourist safety.

During the year that I’ll be working on Phuket before I retire, my first priority will be to improve safety for tourists and locals, and the way to do that is to focus on illegal drugs.

I hate drugs; I have absolutely zero tolerance for them, and I’m not willing to negotiate at all when it comes to drug cases.

A lot of drug dealers have met their end because of me, either because I shot them during a raid or because after they were arrested and tried, they were sentenced to death by a judge.

Drugs cause all kinds of problems. To start with, they affect the emotions and behavior of the people who use them, never in a good way. Drug-users either turn to crime or become lazy. If they hold jobs and are lazy, they are apt to deliver poor service, which can adversely affect the business they work in, and by extension, the economy.

Drugs are also one of the causes of corruption within the police force – for example, when officers take under-the-table money from dealers. Corruption of all kinds slows down development, which also affects the economy.
So getting rids of drugs has all sorts of important repercussions.

In terms of corruption, another thing that’s important is to provide officers with a good role model. I will be the role model of a non-corrupt officer for all the police in Phuket.

To do that, I need to get in touch with all the officers on the island. I intend to visit every officer in Phuket, both low and high-ranking, so that they can get to know me.

As you might imagine, lower-ranking officers tend to feel awkward talking with higher-ranking officers. I don’t want Phuket police to feel this way. We are all working together, and if someone is a straight cop, he is worthy of my respect, regardless of his rank.

While I won’t compromise whatsoever when it comes to drugs, there are some issues which I can be flexible about. These tend to be aspects of local culture that are deeply entrenched, and in these cases I think it’s up to me to adapt. One example is gambling. I know that there are a lot of illegal lotteries in Phuket, but they’ve been going on so long that I don’t think I can put an end to them.

That doesn’t mean it’s now okay for illegal lotteries to open public shops, just that they should be discrete as usual. If they are not, police will have to make arrests.

I actually think it could be beneficial to open some casinos in Thailand. The times I’ve visited neighboring countries, I’ve seen a lot of Thai people in their casinos. The way I see it, gambling is an accepted activity in many places – a normal part of life. In a way it doesn’t really seem fair that other countries have casinos but we don’t.

If gambling were legalized here, and properly regulated, it could generate a lot of income for us. Of course, we’d have to ensure that people didn’t cheat, and didn’t run off when they owed debts. And players would have to show self-control.

To my mind, gambling is different from drugs or corruption. Drugs affect peoples’ physical and psychological health, and along with corruption cause trouble for other people. Gambling is not like that. Also, gambling can be controlled.

Nevertheless, right now only legal lotteries are permitted in Thailand, and we must abide by the law.

My overall goal in Phuket is to create a place where law-abiding people feel happy to live, and where criminals do not.