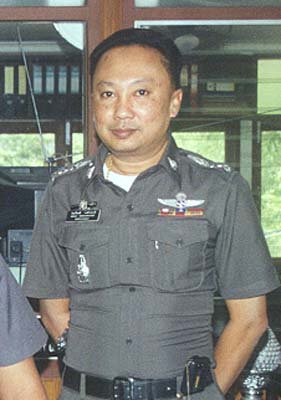 PHUKET CITY: Pol Col Kokiat Wongvorachart, a former Superintendent of Kathu Police Station, will return to Phuket on Thursday as one of the four Deputy Commanders of the Provincial Police. Col Kokiat has been appointed to replace Pol Col Apirak Hongtong, who took leave of absence from the police to pursue a seat in the Phuket Provincial Administration Organization (OrBorJor), running as Thai Rak Thai candidate. Col Kokiat, who is 49, was born in Nakhon Sri Thammarat and was Superintendent of Kathu Police Station for four years before being promoted to Deputy Provincial Commander (Suppression and Investigation) in Nakhon Sri Thammarat in November 2000. He told the Gazette today that he will take up his new post in Phuket on June 3. “I’m happy to be returning to Phuket after about three and a half years. I was Superintendent of Kathu Police Station for about four years, so people there know my abilities,” he said. “I will work as hard as I can for the province and I believe I can achieve a great deal because when I was in Kathu, many people cooperated with the police. People trust me,” Col Kokiat added. Col Apirak failed in his OrBorJor election attempt and has now returned to the police, though he has yet to be assigned a specific post.