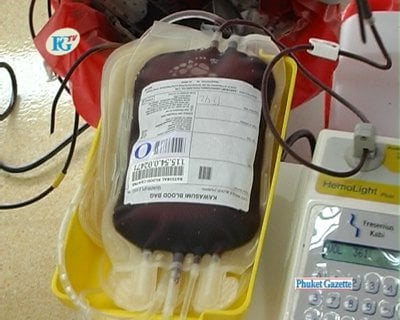 PRBC Director Pornthip Rattajak told the Gazette her agency hopes the drive will help the center stock up its supply of rare Rhesus negative (Rh-) blood types that are far more common among Caucasians than Asians.

“Now we have more than 30 foreigners who have Rh-negative blood type registered with us. We normally set up a booth at Immigration every Monday for foreigners to donate,” said Ms Pornthip.

In the case of foreigners with Rh-negative blood types, they are asked to provide their address and contact information so that they can be contacted in emergency situations.

The clinic will run from 9am to 3pm at Phuket Immigration, located on Phuket Road near Saphan Hin.

August 9, Phuket Immigration, 9am to 3pm

Donations can also be made at the PRBC at Saphan Hin.

The center is open for donations every day of the year except January 1.