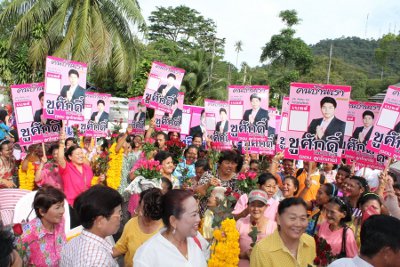 A total of 24 council seats are up for grabs, with 15 for Muang district, six for Thalang district and three for Kathu.

OrBorJor Chief Administrative Officer Manop Leelasuthanon told the Phuket Gazette that so far 48 candidates had registered: 31 in Muang District, 12 in Thalang and five in Kathu, where some late comers registered this morning.

The large number of candidates wanting to register first in order to secure the prime “Number 1” slot on the ballot sheet caused some problems.

“But as we had so many candidates arrive to register before the registration opened at 8:30am, this wouldn’t have been fair, so we asked them to decide who would register first.

“They could not agree, so they drew lots on who would register in what order, and in doing so determined what their respective numbers on the ballot sheet would be,” he said.

Mr Manop added that as many candidates could join the race as wanted to.

Candidates have until 4:30pm Saturday to register at Phuket Community Hall, in Phuket Town.

Mr Manop said that, other than the ballot number issue, everything else has gone smoothly.

“We expect about 70 per cent of eligible voters to show up on election day, because almost every voting district has more than one candidate,” he said.

In accordance with election law, the sale of alcohol will be prohibited across the entire island from 6pm on Saturday, August 25, and continue to midnight on Sunday.

Foreigners urged to give blood at Phuket Immigration