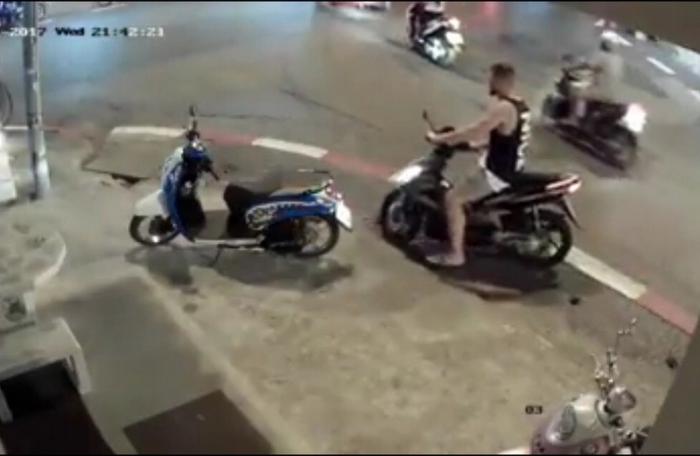 PHUKET: Police are hunting for two foreigners who allegedly stole a motorbike in Patong last night.

A Facebook user named ‘Tangchuemailaew Ngong Ah Di’ posted a CCTV video, at about 10:40am today, that showed the two unidentified foreign men watching a Thai man drive up and park his bike on the side of the road.

The man opened the trunk of his bike to take out something and went inside a nearby building, leaving the bike by the roadside. The foreigners then approached it; one of them kept a lookout for the owner while the other hopped on the bike and drove away.

The caption of the video briefly read:

“I want to warn everyone to be careful and remember to pull out the key from their bike when they park. This happened yesterday outside my house. It seems we can’t trust foreigners these days. The bike owner went into his room for a very short time, but when he returned his bike was gone. It was later found near a checkpoint – maybe the foreigner saw the checkpoint and panicked, which is why he parked it and left. Be careful everyone.”

The bike owner, named by police only as Anan, filed a complaint at Patong Police Station.

“We really appreciate the CCTV footage provided by the Facebook user, who we later learned is the apartment owner, while Mr Anan is her tenant. She said she posted the video to help us catch the suspects and also to warn others,” said Lt Col Somsak Thongkliang of Patong Police.

“Even though the bike has already been found and returned to the owner, we are still looking for the men involved in this incident. We cannot ignore this issue; otherwise people will never be afraid of breaking the law,” Col Somsak added gratuitously.