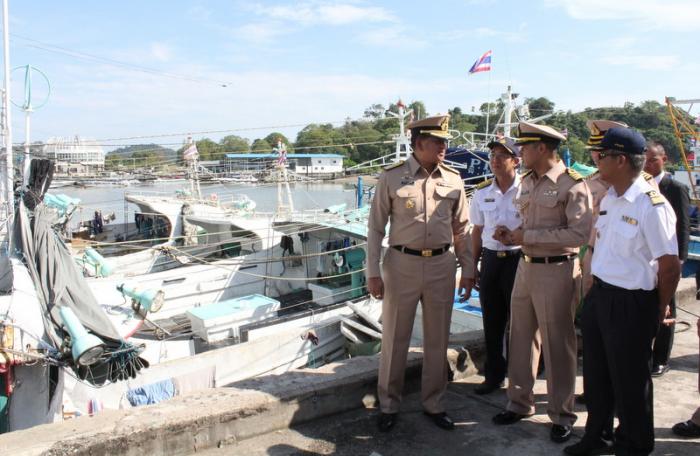 The investigations are being conducted by a joint task force of the Navy, Immigration, the Marine Office, the Employment Office, the Marine Police and other officers, and led by Vice Admiral Suraphol Kuptaphan, commander of the Royal Thai Navy Third Area Command.

Two other boats were also named in the investigations; Yutuna No 1, which was requested to stop but instead turned around and left, and Sheng Ji Qun 3, which had entered Thailand previously but left the pier on November 15 before the investigation started.

“All nine boats requested to enter Thailand and tie up at the pier, stating boat repairs as the purpose of entry. We started to investigate after we found their documents to be suspicious. They claimed to carry a Bolivian boat registration licence, but after the marine office checked with Bolivian officials, they confirmed that none of the boats was registered there,” said V/Adm Suraphol.

Additionally, Shun Lai and Abubant 9 did not notify the Marine Office at least 24 hours prior to berthing at the pier, and were fined 5,000 baht each.

“We will not allow any of the boats to leave until the owners come and provide proof of nationality. If no one appears, we will seize the boats and sell them,” said V/Adm Suraphol.

“Controlling illegal fishing is an important agenda for the government, so all relevant officers are keeping a strict eye on suspicious activities, especially on foreign vessels entering Thailand from the Andaman.”