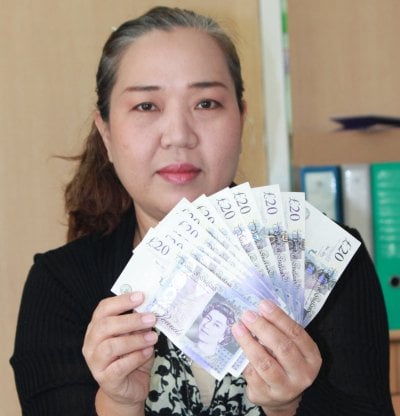 PHUKET: The owner of a currency exchange booth in Kata fell victim to a pair of unidentified foreigners that systematically passed off a series of counterfeit British £20 banknotes.

Kanyarat Tiewsakul, 48, who owns the exchange booth, and the massage parlor and spa next door, said that twelve counterfeit £20 notes were exchanged by the couple between July 17 and July 18 for 11,436 baht.

“A member of my staff told me that a woman came to the booth at about 5pm on Tuesday and exchanged the British banknotes. Later that day, a man came and also exchanged some UK currency. Altogether we took eight notes that day,” Ms Kanyarat explained.

The next morning the couple allegedly appeared together at the booth and exchanged five more bank notes.

“Only the top bank note was real,” said Ms Kanyarat. “The others were fake.”

The couple was described by staff as being in their forties, with the man being blond and a little overweight.

“My husband went to exchange the banknotes in Phuket Town on Wednesday morning (July 18). Later, the bank called to tell us that the eight banknotes were counterfeits,” said Ms Kanyarat

“But the bank’s notice was too late, as the couple had just given us another four bad notes half an hour before they called,” said Ms Kanyarat.

She said that her shop didn’t have CCTV and it was unlikely that the CCTV system at the hotel across the road had any footage.

Chalong Police officers visited Ms Kanyarat and took one of the counterfeit banknotes as evidence for the investigation.

“The new female staff member who was in the booth at the time has only worked here for two months. Now all my staff will be trained on how to identify counterfeit-international banknotes,” Ms Kanyarat said.

Thai boats to the fore on Day 2 of Phuket Raceweek