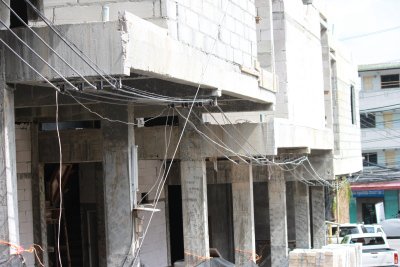 PHUKET: The owner of a building project in Patong was ordered to halt work on Wednesday, when an inspection by Phuket provincial officials found the structure broke multiple regulations.

Having received a complaint about the work through the Damrongtham Center at Phuket Provincial Hall, Vice Governor Somkiet Sangkaosutthirak led an inspection team to the site on Soi Phra Baramee 7, at the north end of the seaside resort town.

A complaint from by local residents, including the owner of the land on which the project sits, cited encroachment onto the road that provides access to their homes further along the soi.

Located about 20 meters from the main road, the new building has a second-storey extension protruding out over part of the narrow soi.

Officials noted that an electricity post had been removed and the cables redirected along the underside of the overhanging structure.

Kolanya Sanguanwong, whose family owns the road, has an agreement with the six other families that allow power and water utilities to egress via the private road.

That is not the only issue. Ms Kolanya led the inspection team to the rear of the building to view a new wall built close to her own home.

In addition to the dust from the construction, the new wall degrades the natural ventilation of her home, she said.

It was also noted that the side aspect of the new building encroaches onto her family’s land.

Chalerm Rakmark, a senior engineer of the Department of Public Work and Town & Country Planning, said Patong Municipality will order the builders to stop working [on the current design] or face legal action. Furthermore, they face daily fines until the building is modified in such a way that it conforms to the law.

“Project owner Preeyakorn Sornthanabodi must discuss with the land owner the best solution for all concerned. He has agreed to demolish the overhanging structure on the second floor and will probably take down the wall adjoining the neighbor’s house at the rear, leaving a 3m gap between the properties.

“The building’s exterior side wall, that encroaches onto Ms Kolanya’s land, will have to be taken down and rebuilt inside the boundary. If the wall is to be retained in its current position the land must be purchased.

“Either way, he has seven days to discuss the issues with his neighbor and the other soi residents,” Mr Chalerm said.