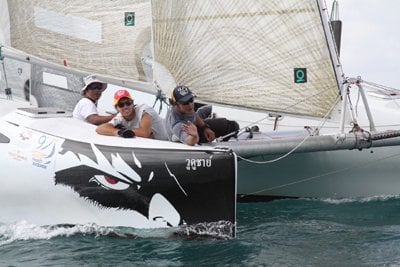 PHUKET: Six knots, then eight knots. Grey skies, then blue. That was the weather prediction for day 2 of the 2012 Cape Panwa Hotel Phuket Raceweek and as the boats left the anchorage, the winds were light but building.

Two windward/leewards for IRC Racing, Firefly and Racing Multihull classes, and longer island courses for IRC Cruising and Classic classes was the order of the day and Race 1 got underway in a fresh eight knots of breeze.

Thai boat Brace! Brace!! Brace!!! (Paul Murphy) got the best start but no sooner had the Chinese-built Katsu (Ben Copley) passed her, Thai regular Kevin Whitcraft and his crew on Wan Marang closed in, rounding the bottom mark less than a boat length behind. Wan Marang went on to pass Katsu and take line honors in Race 1. Despite the lively finish to the end of the race as a storm came through, Chinese team Jing Jing (Rick Pointon) sailed well to win Race 1 on corrected time.

After a delay waiting for the winds to fill in, Race 2 started under glorious blue skies with seven knots of wind building to 10. OCS for Katsu, Wan Marang and Ruby Tuesday saw them unable to recover and Jing Jing raced on for another win. Two from two today.

Coming off the back of a 2-1 yesterday, Skandia Endeavour of Whitby (Stuart Williamson) slipped off the pace in the first race which saw Australian-entry Moya Hin (Peter Jones) take both line honors and the win on corrected time in Race 1. In Race 2 today, Moya Hin took her second line honors but lost out on corrected time to an improving Skandia Endeavour of Whitby.

IRC Cruising got to stretch their legs on a scenic coastal course and Sail in Asia (Mike Downard), sailed by a crew of students learning to sail in Thailand, made the best start taking an early lead which they never relinquished, to secure the daily double – line honours and the win on corrected time.

The Phuket-built Firefly One-Design boats enjoyed some exciting racing today, especially when the winds picked up during the passing storm in Race 1. Bows dug throwing up the spray in as the fleet rounded the top mark in gusting winds of 15+ knots. Voodoo (Hans Rahmann), who scored two firsts yesterday, put in a good performance to win both races and despite it being a clean sweep so far, only a few minutes are separating the top three places each race. Today’s minor places were shared between Premier Cru (Peter Dyer), Twin Sharks (John Newnham) and Moto Inzi (Roger Kingdon).

Miss Saigon (David Liddell) got off to a slow start in Race 1 in the Racing Multihulls class with the SeaCart 26 Sweet Chariot (Henry Kaye) first off the line. The lights airs didn’t suit Sweet Chariot and DaVinci (Mark Pescott) charged to the front. Despite her slow start and a poor spinnaker hoist leaving her tangled on the downwind leg, Miss Saigon was second over the line behind DaVinci, who secured line honours and the win on corrected time.

In Race 2 DaVinci secured another win, making it four from four, but the racing was tight as Miss Saigon took line honors by a single second. Rob Cullen and crew on Nina are racing consistently with two thirds today placing them third overall with two days to go.

McBob The Boat (Joe Gruba), the stunning Hans Christian 38T in the Classic class, got a good start and sailed a solid race around-the-islands to take line honors and the handicap win today. She moves to the top of the class standings, tied on points with Seraph (Captain Bao).